Before the Feminists Started Calling Us Names

This flower was growing in the wild, all over Japan, the rest of Asia and, Europe, too.

I spotted this single bloom at the Hydrangea Festival in Izumi, Okinawa.

When I asked the women standing around, what it was, they all said, "Nadeshiko."

So, I wrote it down and figured I'd research it later. 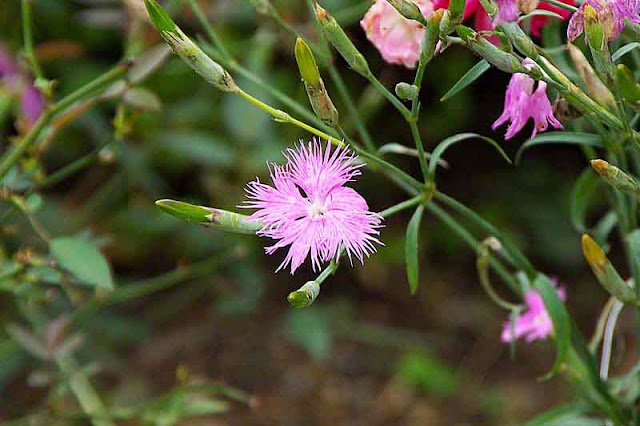 With a flower name, from someone, in this part of the world, you may have some work to do.

There's no telling what language you're getting.

It could be Japanese, Okinawan dialect, Latin or, even some form of English.

A flower name written down in a notebook and a photo will get you started.

Putting everything together, is another story.

Sometimes, many times, I've spent hours getting nowhere online, with a name and photo.

This one was a lucky break.

Almost, always at the top of the page, Wikipedia gave me some great information.

That's where I found the Latin name Dianthus superbus and, got some Japanese for my

Quoted from the source:

"The term "Yamato nadeshiko" is often used referring to a girl or shy young woman and, in a contemporary context, nostalgically of women with "good" traits which are perceived as being increasingly rare."

Dang, as if that wasn't interesting enough, I went and found some, even more juicy material:

What is Yamato Nadeshiko ?


"Yamato nadeshiko is the name of a flower known as a `fringed pink' in English, scientific name

dianthus superbus. Also known as a nadeshiko, it is a small, common, but easily distingushable

Yamatonadeshiko can also signify a kind of (ideal) woman. Some features of that kind of woman are:


During the second world war, the Japanese government promoted the idea of yamatonadeshiko as a kind of national propaganda. A yamatonadeshiko should be gentle and delicate but also be able to endure all the pain and poverty of life for her husband (a soldier) and the country, to win the war, and should always be ready to fight with halberds (or takeyari, a spear made of bamboo used when you don't have a halberd) and to die any time for her country, or to keep her chastity."

Gladly, I give credit to this informative source.

They were wise enough in acknowledgements, to say:


"Edited from a news post by an unknown author."

After Digesting All That Material

It looked like a good time to pay a visit to some serious plant people.

So, I got you a hook-up with the


There's nothing sexy over there, just stuff about flowers but, they do say, this one's

Tried and True and Recommended by 1 Professional.

Posted by RyukyuMike at 9:12 PM