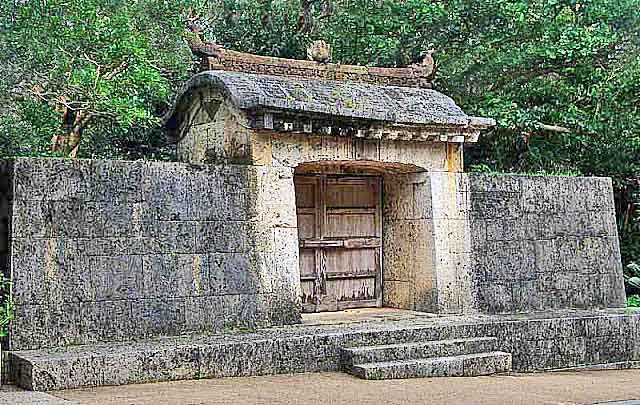 The story began here at this UNESCO World Heritage landmark.

Back in the days of the Ryukyu Dynasty it was a custom of the King to pray at Sonohyan Utaki
for a safe journey before making a pilgrimage to Kudaka Island.

At the gates to the shrine, the King asked for one of the guards to return to Shuri Castle and
fetch his rain gear, in case it may rain, later in the day.

The escorts, didn't think it could possibly rain, on  a beautiful sunny day so, conveniently forgot about the foul weather attire.

Before the procession reached Baten Port, to depart by ship for Kudaka Island, black clouds appeared overhead and, started dumping freezing rain on the pilgrimage.

Once the King discovered, no one had bothered to bring his rain garments, he roared, “We can't visit the sacred island of Kudaka, soaking wet.”

He was cross-eyed and shivering in his royal, water sloshed attire and so enraged, the escort of soldiers feared for their lives.

No amount of apologies could calm the fuming ruler down.

One crazy servant came forward and, tried to cheer him up.

He told the King, “I'm glad we got a good soaking from the heavens. It made me realize, how fortunate we are and, we should be thankful."


The King became even more enraged and, drew his sword, to chop off the fool's head.

“Think about it your Royal Highness” said the servant. “If our Creator had made us, with our noses pointing in the opposite direction, we couldn't breathe on rainy days.

We didn't come to earth, equipped with nose shutters so, God made sure our noses, were placed pointing downwards.” 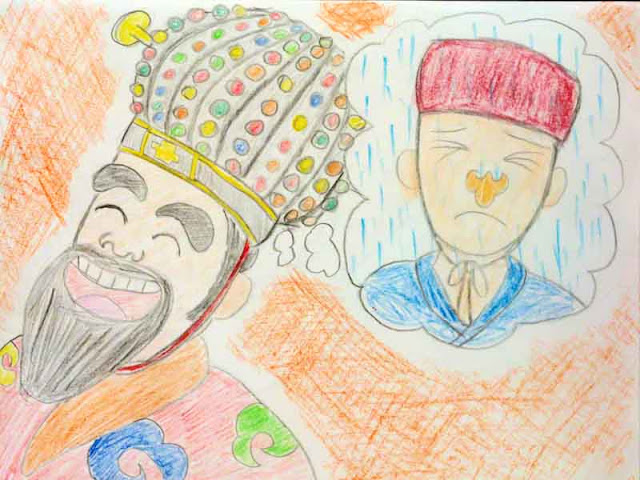 The King had a good belly laugh.  The thought of people, wearing “Nose Shutters” cheered him up and, they probably, continued on the pilgrimage to Kudaka Island, in spite of the rain.