Stop and Think: How Many Characters Named Donald Do You Know ? 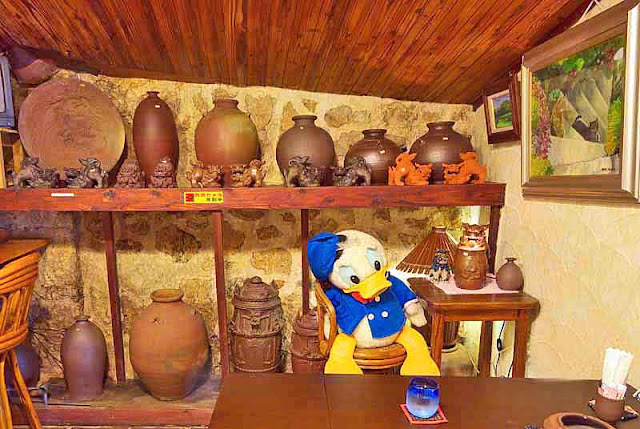 Down in the district know as Tsuboya I ran across this scene one day.

A Donald Duck doll was taking up space at a table, where I wanted to sit to eat.

Not many yachimun (pottery) shops serve food but, this one had a small menu.

The name of the place slips my memory at the moment. But, the curry was unforgettable.

The little, flashy dude stands out among all the ancient-looking urns, vases and shisa.

Anachronism, might not be the best way, to describe this scene.

The clay pottery sells fairly quickly, from those little shops in Naha.

So, the stuffed character is as old or older than, those items. I'll post this blog and share it.

It will hit a wider audience over on Facebook and, I'll ask two Questions.

1. Does anyone know the name of this pottery shop ?

2. How many people, do you know named, Donald ?

Posted by RyukyuMike at 6:27 PM