Tree of a Thousand Stars and Root Hormone Recipe 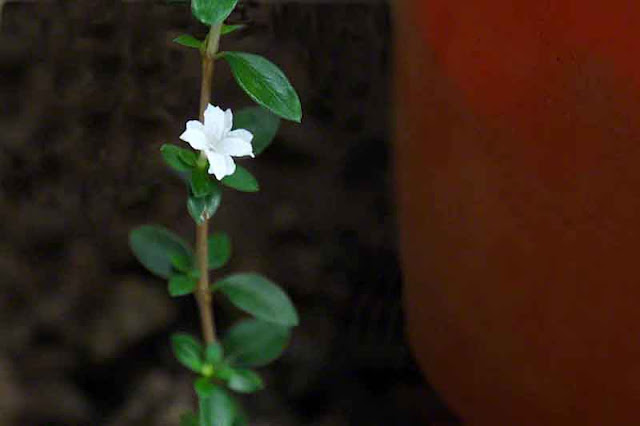 This experiment started when, I rescued one of these plants from somebody's garden.

The Tree of a Thousand Stars, I photographed for a previous blog post.

It's Latin name is Serissa japonica and some folks call it a Snow Rose.

For Japanese  ハクチョウゲ would be the termonology.

Once I got done photographing the plant, I didn't want to throw it away.

Taking it back to the spot where it was liberated from, didn't seem like a good idea.

Not sure what kind of jail term the Japanese have for tree rustlers, I didn't want to find out.

So,  I snipped the plant into little cuttings and, tried different methods of planting them.

Some, were placed in cups of water, to see if they'd grow roots.

Others, I planted in flower pots filled with ordinary dirt, which came from someone's garden.

The plant cuttings in water, only had about a 50% chance of survival.

So far, every one planted in dirt, with homemade root hormone has been successful.

I was going to visit the Japanese Agriculture (JA) store and see if, they sold root hormone.

My Google Translate thing gave me Rootsu-Hormonsu for the Japanese words.

Something told me, they'd think I was some kind of nut if, I asked the farm store for that.

So, I decided to search online and see if, I could make my own root hormones.

That's where I learned about spit.  Yup, spit works as a natural rooting hormone.

Ten of those Trees of a Thousand Stars are growing on in my territory now.

If each one gets a thousand stars on it, I'll have 10,000 flowers all because of spit !

Just in case y'all think, I make these things up, watch this guy's video:

LOL. He spits in his hand and rubs the cuttings around, I wouldn't do it like that.

Get yourself a paper cup or, just spit in the planter, you're going to use.

Some people, lick the cuttings with their tongue but, I wouldn't advise doing that either.

A friend of mine, licked a lamppost and his tongue got stuck because it was freezing outside.

Posted by RyukyuMike at 5:26 PM