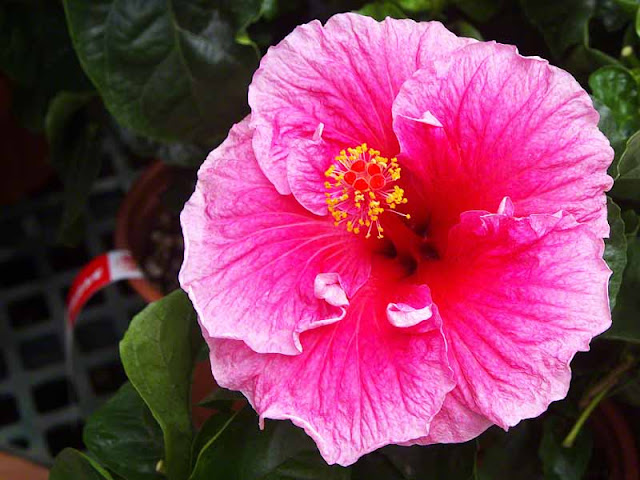 What a day this turned out to be, no wildlife shots but, one heck of a busy day and I got a lot accomplished with the help of my shooting buddy, Doc.  We're doing a Wednesday weekly shooting day from now on, as long as the wives don't put the clamps on our activities.  That's good news.

Today's story will unfold in the sequence I shot these pictures but, plenty of things happened while the cameras were safely locked-up in the car.

Just so you know we weren't drinking, the first flower is a pink hibiscus.  I shot it while Doc was hauling his bag of concrete out of the DIY Store and breaking his back loading up the car.  I asked a salesgirl if I could shoot photos of the flowers and she told me to go ahead.  That's good news.

Some stores are afraid of industrial espionage, especially when the see a DSLR in your hands.

Remind me, someday, it'd be a good idea for me to buy a little Point and Shoot for those type operations. 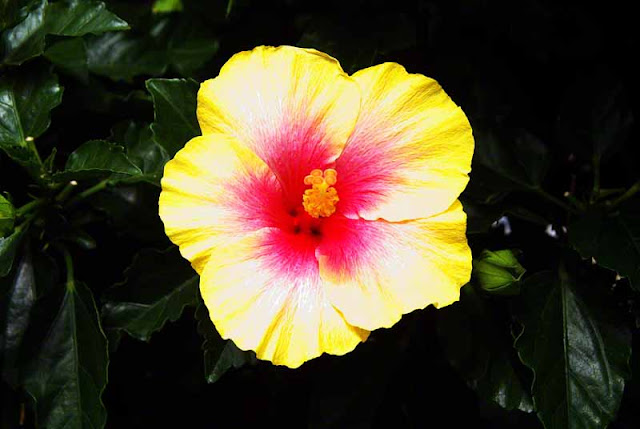 Next, I shot this Multi-colored Hibiscus.  It looked unreal, to me.  Like I figured somebody painted it or put foodcoloring in the planter to make it that way but, Doc said they grow that color naturally. 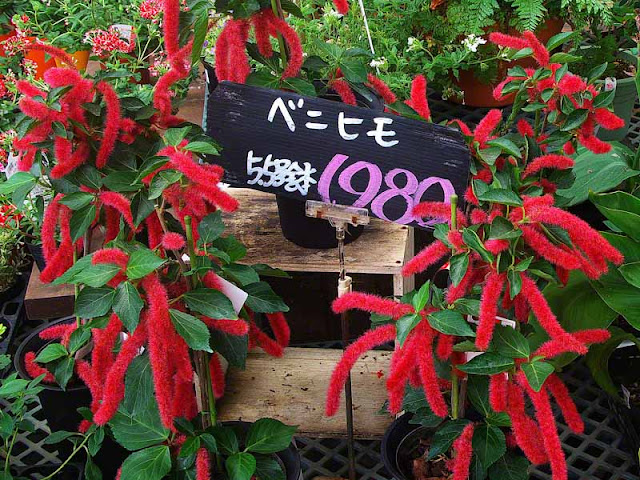 Today I shot the sign that says, Benihimo 1980 Yen and Googled it.  My Wikipedia connections tell me it is a Chenille Plant (Acalypha hispida). 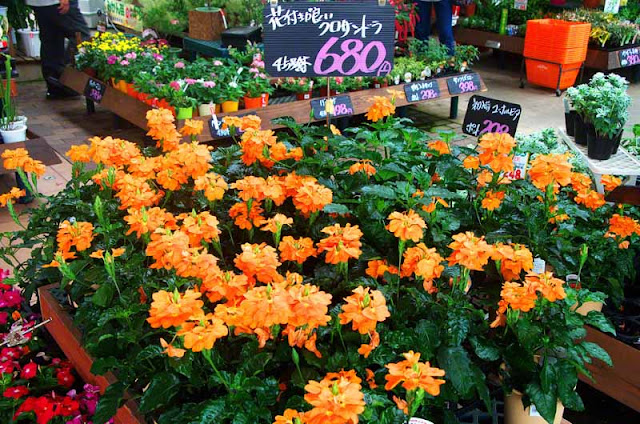 On the way out of the DIY Store's Flower and Garden Center I shot this wide angle scene just because it was there. We'll have to get a translator to read all that fancy kanji that was imported from China, years ago. I only read the simple stuff. I'll find out the names of all the flowers I shot today, eventually and hope I can escape with the information for you, without having to buy any of them.  Er, that'd be bad news.

Before we hit the DIY Store, all kinds of things got accomplished.  Doc and I were on a mission.  I had to do some shopping for frames to mail photos to my contest winners.  And, to avoid firing my printer up to make photos for the frames, I went to a print shop.

With a whole hour to kill, waiting for the prints, we wandered off and started looking at cameras, computers and all kinds of other stuff we really didn't need.

The good news: I found a pair of shoes.  I need new shoes, the kind you can go over rough terrain in.

I found a pair of rugged-looking shoes that are supposed to cost around a hundred US Dollars, on sale for only about 25 bucks.  So, I bought them, even if they're a half size too large for my feet.

Like I told Doc, just wear more socks, until they fit.  I can buy plenty of socks with the 75 dollars I saved.  Right ? 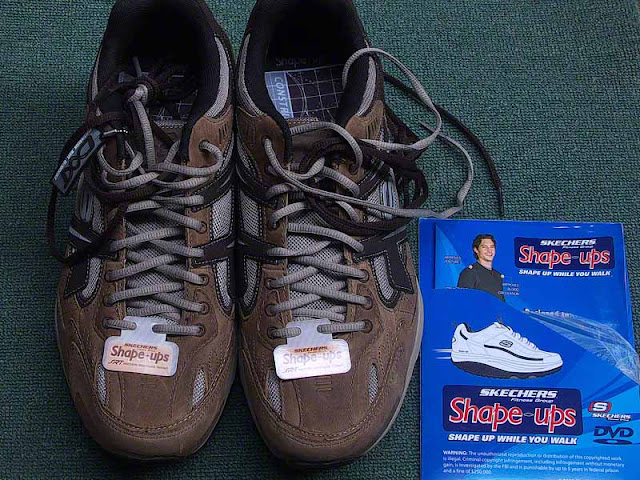 There they are. That's my new shoes, never been worn and a DVD even came with them.  Hah !
How many times have you ever bought a pair of shoes and got a DVD included in the box with them ?

So, when I got back here, to my office, I had to wait for these PCs to wake up and get scanned before I could download my camera.  That's when I got the bright idea to shoot my shoes.  I could do something like a product review on them.  You know, like a one month, blow by blow account of me and my new shoes going over rough terrain and stuff like that.  I'll put them through some rugged tests.

I don't have time to watch a DVD and I'm pretty sure I know what I'm doing when it comes to shoes.

I'll start testing these suckers in a few minutes.  I'm leaving my flip-flops at the bar and I'll be heading to the beach with the dogs, shortly.

Just to make sure these shoes didn't get put on sale because some company went extinct, I googled them.  They're good to go.

Then, I started reading some of the literature that came in the box.  This is more bad news.

There's a WARNING:
"The unauthorized reproduction or distribution of this copyrighted work is illegal.  Criminal copyright infringement, including without monetary gain, is investigated by the FBI and is punishable by up to 5 years in federal prison and a fine of $250,000."  YIKES !

So, it's probably best that I don't tell you any of what I see on the DVD or read in the book until I get authorization from the proper authorities.  I could email the company, I guess.  Or should I just shred the book, DVD, the box and everything that came with it ?  I'm pretty sure I can wear the things and walk alright without anyone's advice.  What would you do, worry about goin to jail ?

Posted by RyukyuMike at 5:17 AM

Mike, I just love your new pair of shoes ! I've been meaning to get myself a paid like this for ages now ... but never got the time to shop for my shoes. I'm a very finicky shopper when it comes to my shoes ... I would need about a couple of months before I could get what I want. I have to see a million pairs before I can choose ‘the one’ for me !
And I want something like what you've grabbed ! Lucky you ! You make it sound so simple and easy ! I like the colour and even the laces ! Wish you had turned one shoe over because I am very curious to see what the soles look like !
Well, I am not much of a flower-man so I will not say anything about your pictures in bloom, except that the colours are breathtaking ! Well, it's 10 in the evening .... and am at stuck work :-( ! Your new shoes took the strain off me a bit ! Thanks !

Tis always a worry,,No Jail is worth the trouble. Shred it all LOL,, As You are always a joy to follow and try and keep-up with,Happy Posting!! Thanks for the warning MAN!!!!

Sumitran,
Oh man, those shoes are really something!
If you Google the place from what you see in my photo, you'll get all kinds of pictures, even videos, showing you the shoes from every angle, inside and out.
They have every style imagineable for you and the family.
Holler at me via email or on that Facebook Fan Thingy, if you need a link and I'll hook you up.
Does the FBI sneak around where you live? We must be discrete!

Gene,
Hah, remember the days when the FBI was running around with tommy-guns catchin' really hardened criminals?
Nowadays, you have to be lookin over your shoulder just to rip one of those "Do Not Remove This Tag" things from your pillow. They may have an agent watching and you could get the maximum penalty allowable under Federal Law, whatever that means!

Mike, I am impressed ! Very impressed.
Looked up a few sites and read some reviews and lastly saw that famous Kim Kardashian commercial (of the Super Bowl fame) for Skechers a few good times ... and I sure am impressed !
Your new Skechers Shape-Ups seem like a dream-come-true pair (pun unintended) ! And boy, aren't you lucky to grab a pair for a song !
The shoes are branded as "one of the most advanced shoes in the world" ! Plus, comes loaded with some unique benefits such as "Age Reversing", "Fatigue Reducing", "Improved Blood Circulation" ... WoW ! But watch your steps initially Mike, as the company has warned users that it takes a while to get used to the odd sole shape. So you need to learn to balance yourself especially while climbing stairs, trekking on uneven surfaces etc.
I've never seen such strong promotions online for any other shoe brand !
So, should I expect to shortly see a new-look, 6 Pack Abs, lean, mean Mike – thanks all to the Skechers Shape-Ups ?
Now, I sure would like to get one of these too ... but haven't noticed them in any of the Muscat Malls or Hypermarkets. But I will ask. Wikipedia said that they are available in over 100 countries around the world. But why not in the Sultanate of Oman, I don’t know !
Better still would be to ask the FBI ! They sure would know ! LOL !

Sumitran,
LOL Guess you did Google them!
Yup, it feels like walkin' on little rockin' chairs, when you take your first few steps.
Truth be known, I'm usually in the rugged terrain wearing only flip-flops so, those puppiess probably do less damage to my body than what I'm used to wearing.
Heck, maybe you could become the sole distributor for those soles in Oman, someday. Bless yer soul !

FishHawk,
Hah, that gal, singin that song came to a hospital I was stuck-in and her and a buncha folks passin' out medals told her and the crew where to stuff them !
Think there was a guy named Lee Greenwood in the pack at the time, too.
Thanks for the memories!

Those boots look like they could dish out a mean kick....watch out FBI!!

Ryan,
Aw, I wouldn't even thinka kickin anybody. But, I'll try and learn how to run faster in them!