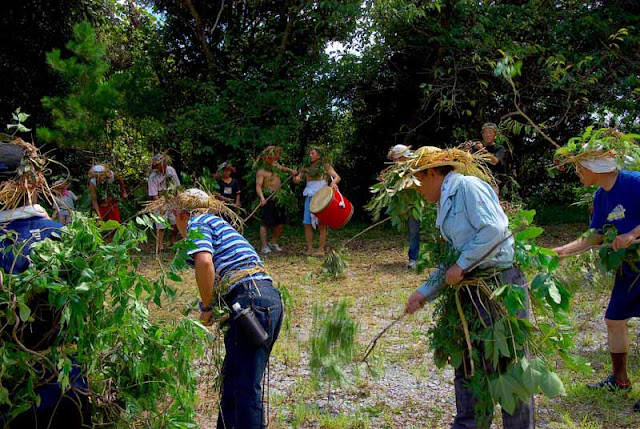 This photo was taken in the Village of Ada Okinawa, Japan August 22, 2009 during the festival known as Shinugu.  Pictured here are the males of the village.  They are at about the halfway point coming back down from a mountain where this ritual takes place, once every two years. Women are forbidden from attending the ceremonies on the mountains.

What's whacky about this festival ?

Nothing, really.  It's a tradition that has been carried on for hundreds of years.

The women are waiting in the village for the men with their jungle trimmings and carrying tree branches to descend the mountain.  They use the branches to swat and shoo away evil spirits.

When the guys get back to town, they form a circle around all the women and use the branches to whack the evil spirits out of them, too !

It's all ceremonial, of course, so nobody gets whacked really hard, as far as I can tell.

Read more about the Shinugu Matsuri in OKINAWA HERE

Are there any Whacky Rituals or Festivals held during the summer months where you live ?

I think it is a little bit wacky if you don't know the history of the ritual. Great post!

Evan,
There's another festival where the women are the only ones who go up the mountain. Might have to shave off my beard and see if I can sneak into that one, too!

That really is pretty whacky, but interesting! Seems like there's a festival for just about everything in Japan and I enjoy reading about them.

BTW, I was even later than you in getting my photo in this week.

Cathy,
Glad to hear I'm not the only one confused by Canadian time !

What? There's a festival where you can beat the crap out your wife with branches, blame it on evil spirits and the cops can't touch you? Wow where do i sign up Mike?

Ryan,
Cracked me up, again. Glad you explained you're only joking to the people.
WAIT !
Do you think people actually come here to read this stuff ?

Nice shot! I think it's funny that they're all wearing "normal" western clothes and then the traditional ones on top :)

Ryan,
Shucks. I was hoping some came here just to look nat the pictures!

Sabrina,
Well, they used to lots of these things in the buff but, it got outlawed !