The Word Cantina Brought This One On !

Anyone who has read this blog for more than a few servings, already knows something about it.

Things get hectic when you run around with a camera trying to document the Ryukyu lifestyle.

So, last night, the cameras stayed home and I went to this cantina, by myself. 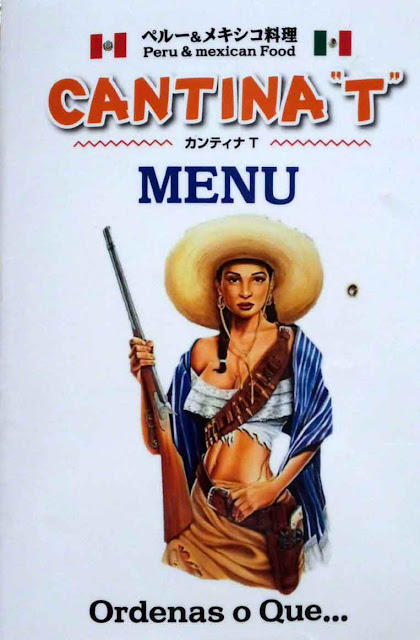 Three or four times before, I've been in this place and never noticed the name, Cantina "T".

Hey, after the cameras are put away, I become very unobservant.

I could tell you stuff like, the beer was cold, the steak tasted great or, a pretty girl was there.

All of the above was true.  And, on top of that, I discovered this, last night.

The place was some kind of Peruvian/Mexican CANTINA !

Now, I want to do a TripAdvisor Review on it because I love the joint.

So, I shot this photo with my cell-phone and emailed it to myself.  That way I won't forget.

The Part Where Marty Robbins Comes In

It's been so long since I've heard that tune, El Paso, it kept me awake half the night.

He sings something about a cantina, in that song but, I couldn't remember what it was.

Just the tune and the guitar pickin' stuck in my head.

Well, I found it on YouTube for everybody to listen to, in case you never heard it before.

Man, that Marty Robbins knew how to sing some ballads.

I decided to put him in the spotlight.  People don't make great songs like that anymore.

You know, I must have played the thing ten times.

Had to pull the shutter down and cover all the windows of my office so, nobody would think I'm crazy.

What would you say if you saw some old guy dancing with a folded tripod like he was riding a horse ?

sayin' stuff like, "I gotta make it to Rose's back door" !


Hah !  Three times, I fell off my horse laughing.  It cracked me up !

Now, I have  to get back to my dancing lessons.

They say the best thing to do, after you fall off a horse, is get back up there and keep riding.

Posted by RyukyuMike at 8:13 PM