Okinawan Folktale: The Fisherman and Plover 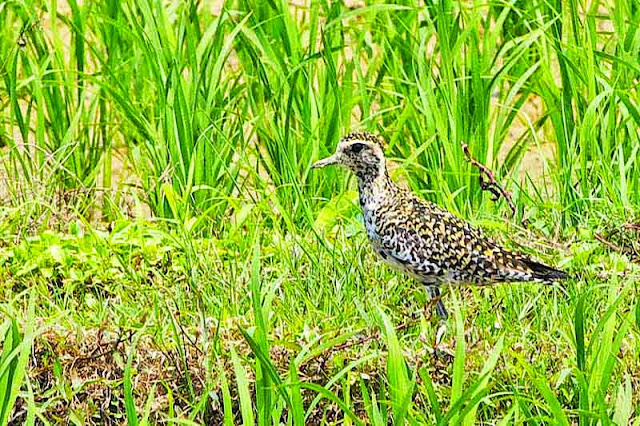 A fisherman, living alone, had recently lost a son.

The lad, named Jira, went to sea one evening but, never returned.

The father quit fishing and, watched the shore each night, waiting for the son to come home.

Forty nine days after the disappearance of the son, he was slowly walking home.

He found an injured bird (plover) that couldn't seem to fly.

The fisherman, took the bird home and cared for it.

The next morning, the bird had recovered and was singing. It flew out to sea.

A few nights later, the fisherman returned home from his daily vigil on the beach.

He was surprised, to see dinner prepared at his table.

He asked a neighbor if she had seen anyone enter his home but, she had no clue.

The next day, he pretended to go fishing but, climbed a nearby tree to watch his house.

A beautiful, young woman came along and, started to enter the place.

The fisherman ran up behind her and, asked, "Who are you and what are you doing here?"

The woman told him, she was the plover, he had helped.

The bird had transformed into a woman to return the kindness the fisherman had showed her.

She agreed to remain, living with the man, with one condition.

He must never tell anyone that she was really a plover.

Not Happily Ever After

Everyone in the village, noticed this beauty of a girl, living with the fisherman.

They also, noticed, the girl never spoke to anyone.

It bothered the guy. Maybe, they thought she was some sort of snob.

One night, he goes out and drinks a little bit too much sake.

Then blabs all over the neighborhood, the truth about his beautiful companion.

The gal can sing but, can't speak because, she's really a plover.

He realizes, he made a mistake and, goes to apologize to the lady for breaking the promise.

But, she turned back into a bird and flew out to sea, crying.