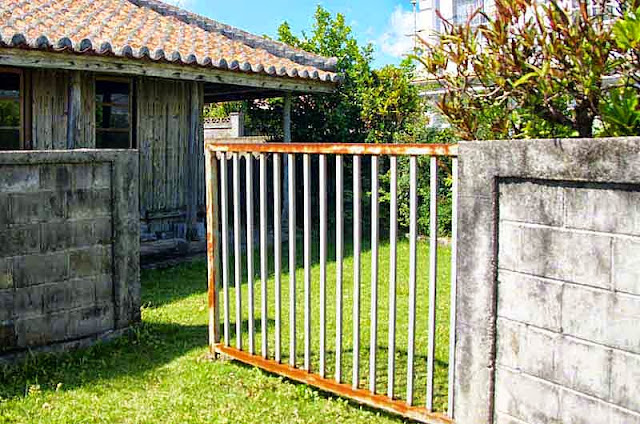 During the Ryukyu Kingdom days the mountainous regions played an important role.

Firewood was required for cooking, in the villages and ports to the south of the island.

A ship would transport the wood from Yanbaru (up north) to Yonabaru, a southern port.

The plan was to cart the stacks of wood to the ship, early in the morning.

The next day, he went to the mountains and discovered, he had been robbed.

All the day's work, except for one woodpile, had disappeared.

He shrugged and, started collecting timber, all over again.

Nightfall arrived and, he finished piling wood and went home once more.

When he returned, the next day, the scene had repeated itself. Not good for business.

Someone was stealing his work and, he wanted to catch the thief.

He got his wife to assist and bury him in the last pile of wood, stacked for the day.

After sundown a hook came out of the sky and took the woodpiles away.

When it took the stack, the man was hiding in, he feared for his life but, hung on to the hook.

He was hauled away and lowered onto a cloud.

He jumped out of the woodpile and saw acres of clouds stretching across the skies.

A god came along and roared, "What are you doing here, human."

The man explained, he harvested firewood for a living and, someone was stealing it.

That was how he discovered, his wood was being hauled off to heaven.

The god explained.  The man had been taking more than his fair share of wood each day.

God, left him one pile and had the rest taken away.

He showed the man thousands of neatly arranged containers of liquids.

He pointed out one small sake cup and told the man, that was him; the poor woodsman.

Next to the small sake cup, was a huge jug containing 100 times more water.

When he asked god, he was told, that person hadn't been born, yet.

The god said, the container was Tetsu no mon (iron gate) and represented abundance.

The human wanted to know if god, would let him borrow that jug of good fortune.

God figured, he seemed like a nice enough guy so, what the heck.

He could use the jug, until the person it was intended for, was born.

The man took the jug and rode the hook back to the mountain.

From that day forward, his fortune changed.

Gold was discovered on his land and he became the wealthiest person in Yanbaru.

He built a large house, protected by an iron gate.

It was a cold, rainy night and, she needed a place to stay.

She was about to have a child.

She asked the sentry, guarding the gate if she could spend the night in the gatehouse.

New Year's day the sun came out and the weather turned warm.

The gate guard informed the master, the woman had given birth to a baby boy.

The peasant woman, named the child Tetsu no mon because he was born at the iron gate.

The wealthy man and his wife had no children of their own.

They invited the woman and her son, to be part of their family.  She gladly accepted.

They became one wealthy family and lived....

Posted by RyukyuMike at 2:23 AM