Okinawan Folktale: Did the Bride Become a Calf ?

Mother worried about her single daughter Chiru-gwa and, who she would marry.

All the well to do young men wanted her hand in marriage.

She would seek the advice of God, by praying outside Sonohyan Utaki. 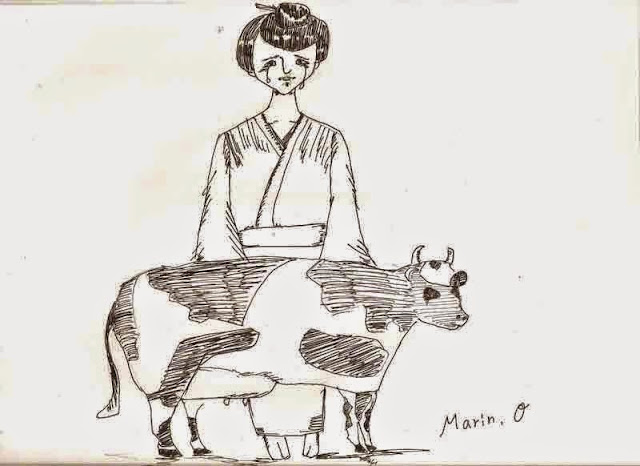 A deadbeat of a man called Tara, learned of the mother's praying at the utaki.

He devised a plan, to insure, Chiru-gwa, would become his wife.

Early one morning, he hid in the bushes, behind the stone gate, of the sacred site.

The mother was bowed with folded hands, praying in front of the gates.

From within, came a deep voice, telling her, "God speaking, listen to me, carefully.

On your journey home today, you will meet the best man for your daughter, to marry."

The mother, thanked God, bowed and started on her trip towards home.

Rounding a bend in the road, she met a smiling Tara.

Everybody knew he was a no good slouch but, the word from the heavens must be followed.

A Wedding Was Arranged

One moonlight night, Tara dispatched a palanquin to bring home his bride.

The two men carrying her got tired and stopped alongside the road to take a rest.

Having had way too much to drink, they soon fell asleep.

Along came the King and his entourage, returning to Shuri Castle from a day on a hunt.

The King wanted to know, who was inside the palanquin.

He was told, there was a bride, crying in there and, two drunk men snoring in the grass.

He asked Chiru-gwa, why she was crying, felt sorry for her and, invited her to the castle.

He told the servants to place a calf in the palanquin and, they departed.

The palanquin bearers woke up with the sun and, hurried along with their load.

A large gathering was waiting to meet the bride, at Tara's House.

When he opened the palanquin, a frightened calf, jumped out.

The crowd laughed.  They figured this was God's way of rewarding the idiot, Tara.

He became angry and took the calf to Chiru-gwa's mother and, said he didn't want it.

The mother was saddened and, worried, God may have done this to her daughter.

A Message from the King

A servant from Shuri instructed Chiru-gwa's mother to bring the calf to the castle.

She bathed and brushed the calf, to present it to the King.

At the castle, she was greeted by the Queen.

The Queen exclaimed, "Mother" and hurried over to kiss her.

Chiru-gwa had become the King's bride.

Condensed from: The Bride Who Became a Calf