Condensed Version of the Talking Buffalo

A peasant traveling Okinawa island stopped, to rest, at the top of a hill.

He heard a voice but, couldn't see anyone nearby. 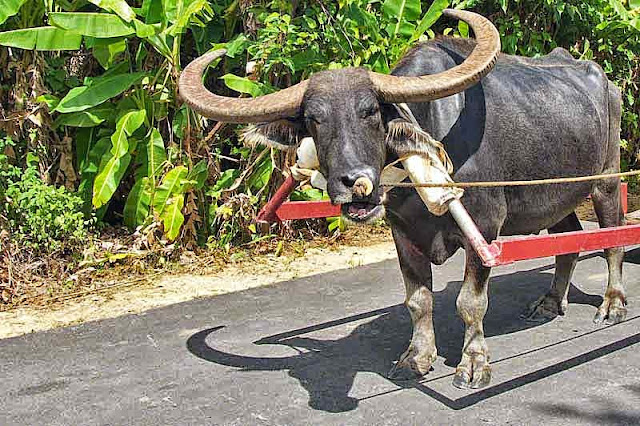 Other than a long-horned water buffalo, there was no living being, in sight.

The animal was tied with a rope so, the man untangled  and, released it.

Making a joke, the man asked if the bull had spoken to him.

The water-bull said, "Yup, it was me talking to you."

The animal thanked him for being set free and, wanted to reward the man for his help.

The bull explained that a wealthy man from Maeda, had left him in the woods, to die.

If they visited Maeda, the young man could wager, he could make the bull speak.

They went to see the wealthy man, in Maeda.

The wealthy man laughed and laughed at the young man's proposal.

He could get the bull to talk, like a human.

After a good, hard laugh, the wealthy guy said, he would bet everything he owned.

There was no way, that worthless, old water buffalo could speak.

The young man would become an unpaid servant for life if, he lost the bet.

A neighboring landowner and several servants, were brought along, to witness the bet.

The young man asked the bull to speak, as if he were human.

The water buffalo stood there and said nothing.

The peasant, began pleading for the bull to talk.  Still, nothing.

Everyone else, thought this was hilarious and laughed out loud.

The young man, fearing he was losing the bet, began to beg the bull to speak.

Suddenly, the animal said, "OK.  I'll talk. I'm not comfortable in front of these traitors.

Please, hide them from my view, particularly the evil master."

With a cloth, hiding the bull's face from the crowd, he spoke.

He talked about spending a lifetime, as a beast of burden for the land owner.

And, upon reaching old age, being abandoned in the mountains, to die.

The young man, won the bet and, became the most wealthy person in Maeda.

One day, the animal made a serious prediction.

A plague was about to hit the island and, it would kill most of the population.

The bull told the young man, in a former life, it was a human.

It had been reincarnated as an animal.

In order to return to its human form, it must be consumed by humans.

Plague, wouldn't kill the villagers if, they consumed the buffalo in a shimakurashi ritual.

Shimakurashi, is an annual ritual, performed to prevent epidemics.

The water buffalo explained, villagers would recognize it when it became human, again.

Transformed back into a human, it would have a birthmark on its chest.

The mark would be in the shape of a bull's horn.

Reluctantly, the bull was slaughtered and, shimakurashi performed.

Disease ravaged the island but, villagers from Maeda were spared.

A pretty young maiden, traveling the island, asked if she could spend the night.

The young man, explained, he was unmarried.

If a single woman spent the night in his home, stuff could happen.

She spent the night. Stuff happened. She left the following morning.

The next year, she returned.

She had a baby, wrapped in a blanket and, told the young man, it was his.

When he unwrapped it he found the bull horn birthmark on its chest.

MORE FOLKLORE
Posted by RyukyuMike at 2:32 AM