Several times, we have hiked up and down the trail at this attraction.

Recently some folklore has been discovered about the place.

A bit under the weather, I got this video to share so, no hiking is necessary for today's tale.


If you look closely, at the beginning, there's some guy with a beard, just like me.

And, he's climbing the cobblestone path, about as fast as, I usually do.


Days of the Ryukyu Kingdom

A man, named Sanra was on a mission from Kakinohana.

He and, everyone from the Okinawan islands heard strange noises, at night.

It was the sound of mosquitoes, humming that caught Sanra's attention.

He had never seen or, heard this unusual chorus before and, wanted to learn more.

So, he asked a Chinese person, where he might go to admire them.

The Chinese guy, pointed him in the right direction, over in some brush.

Sanra captured as many as he could and, kept them in a box.

He could hold the box to his ear and, enjoy the music they made.

What a great gift this would be to present his wife and children, he thought.

With his box of humming insects, Sanra hurried towards home.

Climbing to path to Kakinohana was exhausting.

So, he stopped to take a break when he noticed something.

The buzzing of the mosquitoes had stopped. He shook the box and, still -- no noise.

Thinking, they had all died, he became disappointed and said, "Akisamiyo."

He opened the box and, all the mosquitoes flew away ! 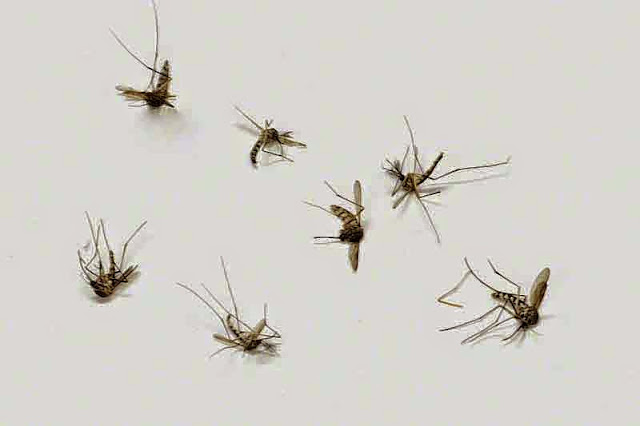 The Insects Are Everywhere Now

Before long, the bugs were singing throughout the Ryukyu Island Chain.

And, people learned, soon enough, they suck the blood out of you, too.

If you visit Kakinohana, don't forget to bring some bug spray !


OTHER OKINAWAN FOLKTALES
Posted by RyukyuMike at 12:30 PM