Kindergarten: The Highlight of the Day for Santa 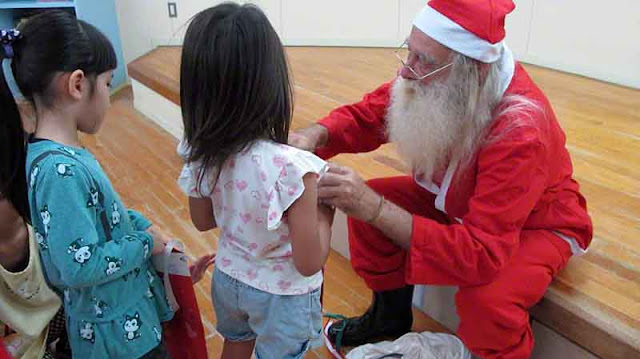 This was probably the first time, these youngsters encountered a real Santa Claus.

They were a little timid, at first but, they had some fantastic teachers, encouraging them.

They sang and danced, on the stage, for Santa, before receiving their presents.

Of course, Santa was too busy, to bring along a tripod and camera.

The children all, thanked Santa (in English) for their gifts, which really surprised me.

They were encouraged, to ask Santa questions and, they came up with some good ones.

They learned my age, real name (Kris Kringle) and, wanted to know, where I came from.

It's a good thing, my translator helped me. I had to tell the kids, I was from Finland.

And, was brought here by reindeer, pulling my sled, through the skies.

Before leaving, to see the rest of the children, around the world, I had a special request.

Each child, wanted to give Santa Claus a hug.

The rascals made my glasses get all steamed up.  Santa, shouldn't have tears in his eyes.

So, I told them, I had to hurry and visit the rest of the world.

After promising, to come back to their school again, next year.

I got the heck out of there so, I could wipe the tears of joy away from my wrinkled up face.

If, you've never been a Santa or, Santa's helper, you should give it a try.

It will warm your heart on the coldest December day.  I swear.

Posted by RyukyuMike at 3:37 AM

Merry Christmas and Happy New Year, +Muza-chan, just in case, I get too busy to talk to you, over the next week !

That's so sweet Mike...you made their day and in return, they made yours. Hope you had a wonderful Christmas 🎄

Ellen
Thank you. It was a fantastic Christmas and, I hope you enjoyed it as well.