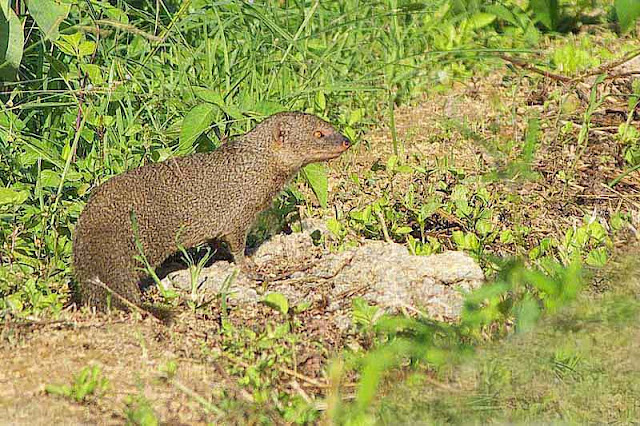 They were brought to Okinawa by someone, thinking poisonous snakes would be eaten by them.

In Hawaii, and St. Croix, they were imported for rat control and, it was a bad idea.

The varmints are harming endangered species and, having negative effects, everywhere.

It got me thinking of ways to help out and get rid of the pests; create a demand for them.

Suppose, somebody came up with a recipe for their meat; that would be a good thing.

It would be nice, to help out St. Croix but, I didn't know where it was and, had to check.

St. Croix is way over there in the U.S.Virgin Islands; that's just great.

How about a pineapple flavored Mongoose Burger on a Virgin Bun then ?

Mongoose: Never Knew She Was Pregnant When I Shot Her

I like your idea of commercializing this varmint. Throw in a catchy phrase like "you can suck the head", and I'm sure half of Louisiana would jump on the band wagon.

Kim,
Whoa, dude. I have some good friends, down there, in Louisiana, who might object, to that statement. But, you could be right about the other half of the state !