This Bug is a Real Killer ! Meet the Assassin Fly

When I spotted this insect, it was sunning on a country road in northern Okinawa, Japan.

That's a pretty mean-looking bug.  So, I had to sneak up on it and take some photos. 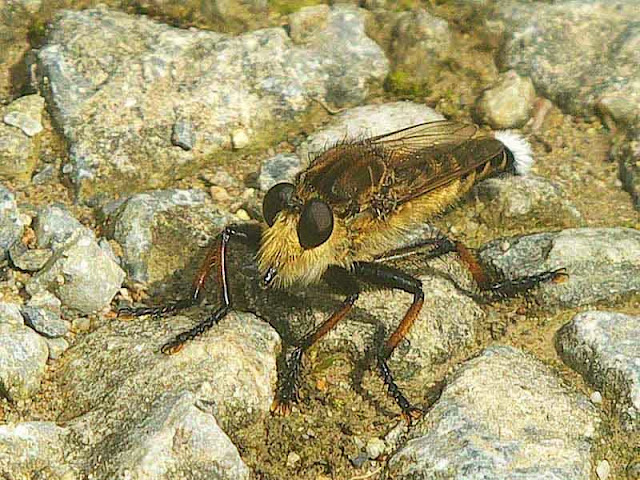 Look at those big eyes and nasty barbed legs !

It took awhile to research this critter and get a positive idendification.

It is a Robber Fly (Asilidae) also known as an Assassin Fly.

Not to worry.  They won't bite humans.

These guys only go after other bugs.  And, they are ferocious.  They nab their prey out of the air.

This guy, lying on the road, is just charging-up his batteries.

Maybe, the sun warms him up so, he can fly faster.

Those bulging eyes aren't watching the camera.  He's looking for something, flying to eat.

When he spots a meal flying over, that's when he springs into action.

The critter he goes after can even be bigger than him.  It doesn't matter.

He will grab his victim out of the air and inject some poison.

The muscular legs insure there will be no escape.

And, he will hang from a place, up off the ground, by one leg, while munching away.

Wouldn't you like to have one of these in your yard ?

It would be more fun than watching TV, I bet !


Learn more about Assassin Flies at: