Travel Photo: Just a Guy on the Seawall with His Sanshin 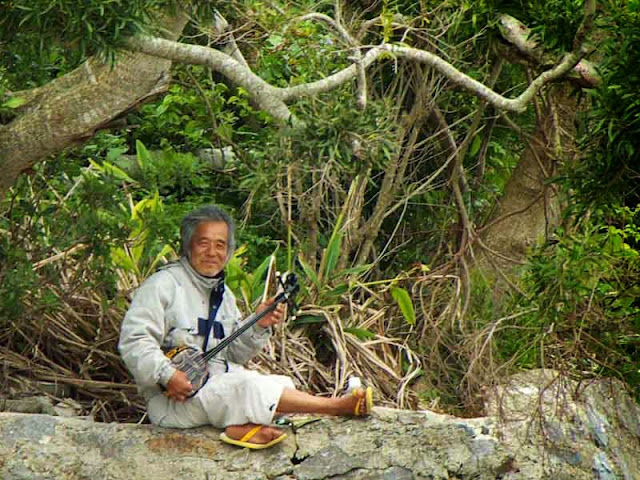 Out researching an event that takes place on an uninhabited island we spotted this guy.

Many of the cultural events we go to document, take months (in advance) of preparation.

There aren't any English language travel guides, written about them.

So, getting out there and beating the bushes, is what Map It Okinawa dude and I do.

We were looking for an off shore island, rumored, to have some ceremonies in June.

When you read something that says an event takes place in "June" you have to wonder.

With June being the sixth month of the year, sometimes things are lost in translation.

In Okinawa, Japan, most cultural events take place according to the Lunar calendar.

The sixth month might be in July or, August, depending on what year it is.

The guy on the seawall could point us in the direction of the island we were looking for.

But, he had no recollection of any event taking place, over there, during the month of June.

A few hundred meters away from him, I took this shot with my lens at 250mm.

While he was playing his sanshin, I did a little dance.

That got him smiling and he gave the OK to snap a picture of him.

Someday soon, I should go back and visit that guy.  I think we'd get along fine.

He has good taste in flip-flops.  Dontcha think ?

Posted by RyukyuMike at 5:12 AM