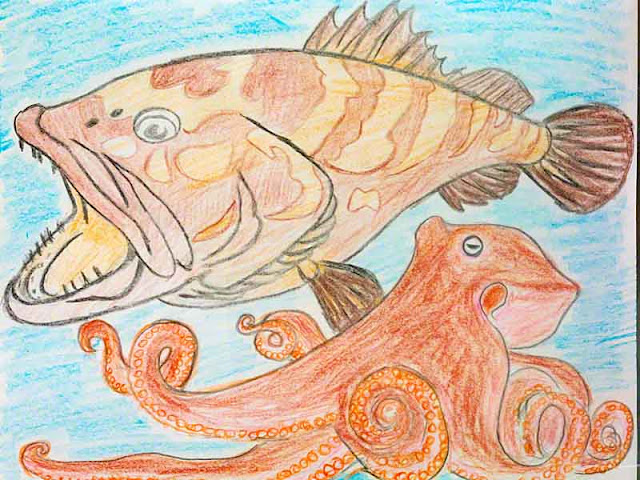 A feeble, ailing woman lived on the island, with her only son. As man of the house, it was his obligation, to provide medical support and nourishment for his sickly mother.


A talented outdoors-man, he would go to the mountains and hunt wild boar. The pork was nutritious and, one pig could sustain the family for weeks. He wasn't much of a farmer but, knew his mother had other dietary needs. She, tended a small vegetable garden. He, would gather the roots and bark of certain trees and, pluck fuchi-baa (mugwort) for her, to use in cooking and making herbal teas, while on his daily outings.

He knew shellfish and fresh seafood were an important supplement in the Ryukyu diet. Sometimes, he would go, at low tide and, collect mollusks, bringing a small bucket of shells home for diner. He just, wasn't enthusiastic about the scent of the ocean, during the cycles of the tide, at that part of the day.


When the Tide Is Right

Late one afternoon a cool breeze and the sounds of the surf, jogged the lad's memory. He recalled the days when his father would say, “This is the best time, to land a fat, fresh fish, to bring home for supper.” Conditions seemed perfect.


There wasn't much fishing tackle, left from the days his father walked the earth. The boy hurried, to the shed, to see what he could use, to land some fresh fish. All, he could find was a coil of fishing line and one hook. His father, had called it, “The lucky fishing hook.”


He hurried, down to an outcropping of rocks, baited the hook and, tossed it into the sea. The sounds of the waves, gently breaking against the coral was relaxing. He felt as if, he could sit there, inhaling the salty air, forever. It was like receiving some sort of ocean-side therapy. It was comfortably calm.


Before, a minute went by, he felt a ferocious yank on the fishing line. If he hadn't braced himself quickly, he would have been hauled into the sea. The fish, taking the bait was a monster, thrashing wildly, left and right, nearly pulling the boy off the rocks. He didn't have a rod and reel. He struggled with the line, reeling it in, by wrapping it around his left hand, as he fought, to bring the fish ashore.


A few times, he caught a glimpse of what, he had caught. Centimeters, at at time he, was pulling the fish towards the rocks. He started thinking, of the smiles, it would bring mama; smelling this catch, roasting over the coals, hearing it sizzle, over tonight's fire. It was exciting. Just a few more tugs on the line. He hauled it up, until its tail, came out of the water and, got salty spray in his eyes. But, suddenly, his hopes and dreams, were dashed. The fish-line broke and, the thing, got away, with his one and only fish hook.

The young man thought, how disappointed his mother would be and, he cried. All the boy would, return home with, was a broken string, wrapped around his hand, no fish for diner and, no more lucky fishing hook.


The Ryukyu God appeared and asked the youngster, why he was crying. The boy, told him the story, about the fish which, had escaped, with the hook. God, knew the son had always done, the best he could, in caring for his sickly mother.

All Inhabitants of the Sea

The God went off onto the sea and commanded all ocean-dwellers, to assemble in front of him.


Every form of sea-life, showed-up promptly, except for one creature. The mibai (grouper) was missing.


God, wanted to know why. An octopus, raised an appendage and gave an excuse, for the missing mibai. “The fish, asked me, to tell you, he isn't feeling well so, couldn't answer your call.”


The Ryukyu God, didn't believe the octopus's story and, let him know. “Get me that rascal fish, right now.” Red-faced, the octopus swam away and, soon returned with the mibai. God, asked if the fish, had taken a hook, away from the boy, who was trying to get food for his sickly mother. The mibai, admitted, “Yes God but, it's stuck inside my cheek.” God, took his walking stick, pried the fish's mouth open and, twisted the fish hook free.


Next, it was time, to punish the octopus, for telling a lie. He took his staff and, whacked all the octopus's arms, beating them to a pulp.


Ever since that time, the octopus, has no bones in its tentacles. And, mibai fish, have big mouths.


The Ryukyu God, returned the lucky fishing hook to the young boy. His mother, overcame her sickness and, the son became a highly successful fisherman.


Adapted from: The Story of the Mibai and the Octopus P.180

Posted by RyukyuMike at 7:33 PM