A Search for the Minamoto Tametomo Monument 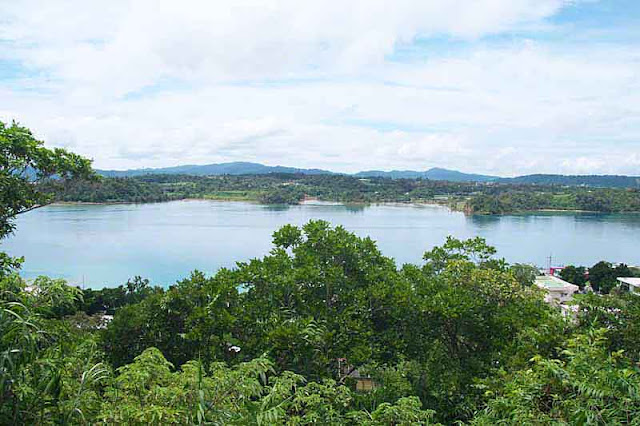 A Typhoon Sent Him Here

Tracking down legends and folktales is what led me to this hill overlooking Unten Port.

Tametomo was an exiled warrior from medieval Japan, stuck in the Ryukyu islands.

The port, in Nakijin is named Unten because, Untenko means fate of heaven.

This, I learned at Okinawan Folktales which is on a Chicago website.

The author, mentioned a monument to Tametomo, being in Unten so, I had to find it.

Driving around the port a few times, we couldn't find any monument.

So, the next thing to do, was go inside the port and, ask around.

Hah. Most of the people hanging around the place, were Chinese tourists.  Would they help me ?


A Light Came On

A look in the gift shop, when it wasn't busy, might provide some useful information.

Before going in, I noticed a nifty poster, taped to the store window.

It had a couple of hundred fish pictures on it, labeled in English, Japanese and Uchinaguchi.

The shop was comfortably cold so, I poked around like, I was looking to buy something.

Then, when the shopkeeper wasn't busy, I tried some uchinaguchi (Okinawan) on him.

That got him smiling and, babbling back at me.  And, he knew of Minamoto Tametomo.

While the professor and I, were shooting the breeze with the guy, I noticed something.

The fish posters were rolled up in cellophane and they were selling them.

So, I joked with the salesman and told him the prices were outrageous.

Not being a filthy rich tourist, I told him, I don't have that kind of money, to waste.

He noticed the big camera I was carrying and said, "Take a picture of one."

He pointed us in the right direction.  We thanked him and headed for the hills. 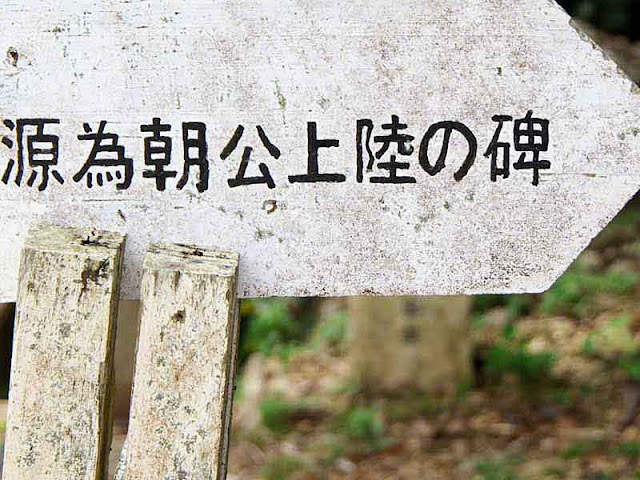 Far Above the Port

It was beginning to look like, we would never find this historical marker.

It was hot and muggy outside and, it was getting close to lunchtime.

We had parked at intersection and done some hiking and, were about to give up.

A farmer, driving up the hill, slowed down to take a turn and, I hailed him.

The good old guy, told us the monument was farther up the hill.

We thanked him and hopped back into the air-conditioned vehicle, to keep searching.

As we rounded a bend, the farmer was waiting in his truck, to guide us to this sign. 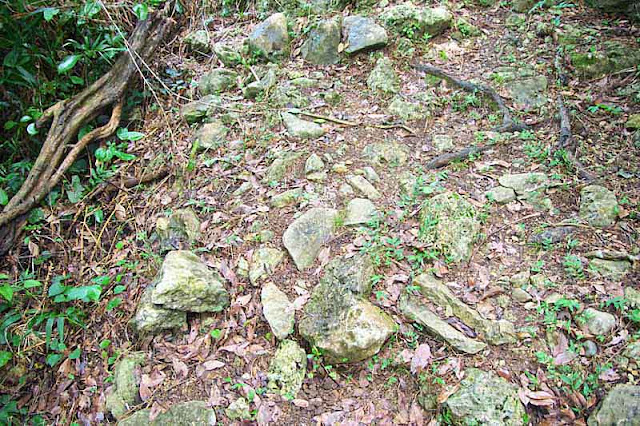 The spot we were searching for, isn't visible from the paved road.

It's about a two minute hike uphill, over some ankle-twisting terrain.

Well, I was wearing my trademark, yellow flip-flops so, five minute hike, for me. 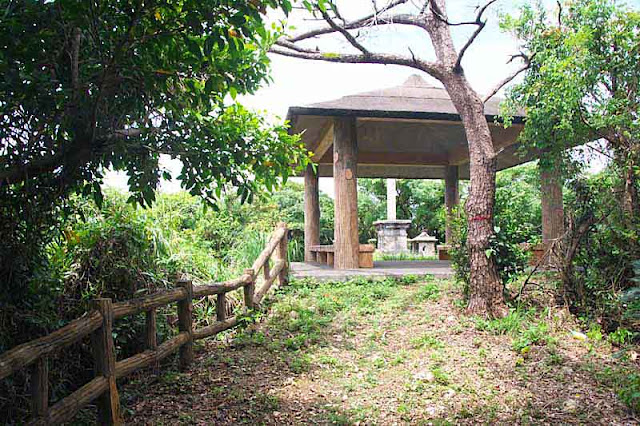 At the top of the hill and, end of the trail, it was nice to see this canopy; it provided shade.

The hottest days in Okinawa are tolerable if, you get out of the sun and, have an ocean breeze.

Standing on a bench, I shot photos of the harbor below, to create a GIF. 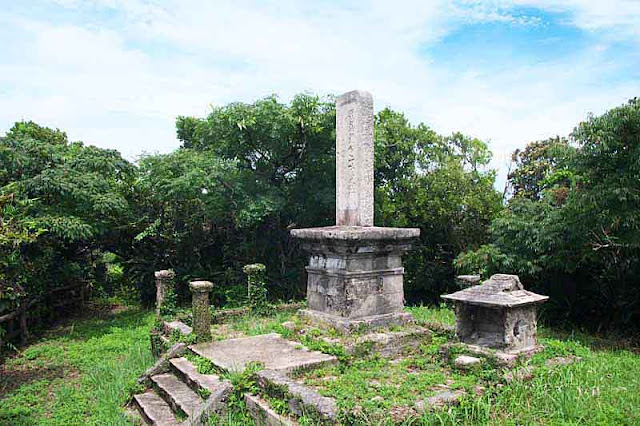 At the end of the trail is the Minamoto Tametomo Monument.

It looks as if, it's a few centuries old and withstood many, heavy winds during typhoons. 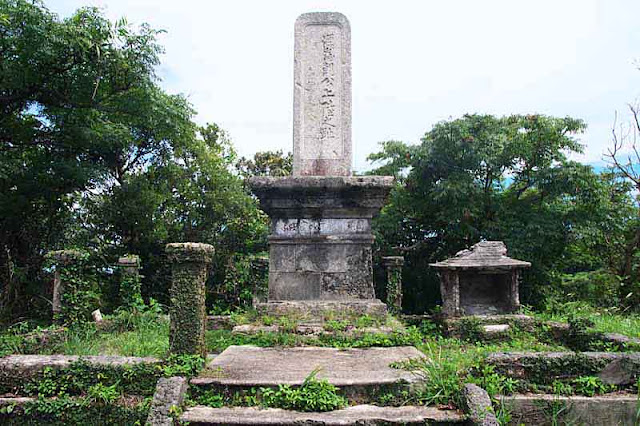 
Tamemoto, would  eventually move to the south of Okinawa to live.

He married the daughter of the Aji (Lord) of Ozato and, fathered a son.

The boy, would become King Shunten, ruler of the Ryukyu Dynasty.

Having a Ryukyu ruler from the Minamoto bloodline gave Japan a significant claim.

It was reason enough, to annex the Ryukyu islands into Japanese territory.

It's the 21st Century and the Chinese want to claim some of the Ryukyu islands.

They better start checking their DNA and, figure out, they aren't Japanese.

I'll go back and ask the guy in the gift store to lower the prices of his posters.