Call It a Devil Cake


Mochi (muchi) is rice cake, served to young and old during the New Year.


An uni or, oni roughly translated, would mean, devil.


On the 8th day of December (Chinese calendar) unimuchi is served in Okinawan homes.


It is believed, that this date precedes the coldest day of the year.


Cakes, wrapped in gettoo leaves, are opened and families ask the spirits for protection.


Consuming the unimuchi is believed to ward off bad health and bring good luck.


If you don't care for gruesome stories, there's no need, to read any further. 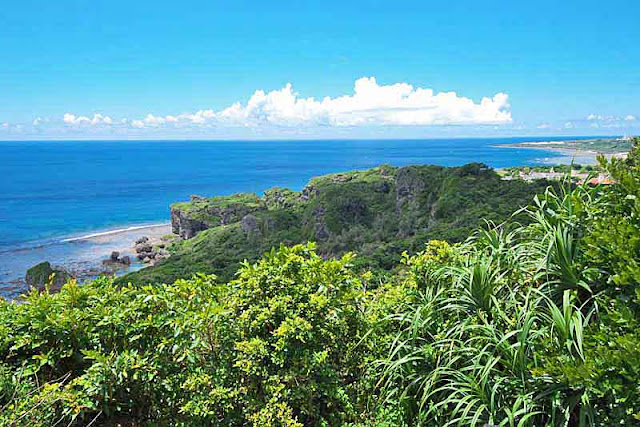 The Demon Lived in a Cave


High on cliffs, overlooking the ocean, the monster stayed concealed during daylight hours.


In his youth, he was a perfectly normal child and, cared for his younger sister.


The parents, had moved on to the world of the spirits, at an early age.


A hard working teen, he earned what he could, while sister, kept a garden and cooked.


Survival was the name of the game and, he did well, as the man of the house.


The lad, sprouted small horns on his head and, developed a hairy body.


He became violent and mean, as if he were a madman.


The villagers, ganged up and, ran him out of town so, he headed for the hills.


Not long afterwards, bad things began to happen, in the once peaceful hamlet.


Little things like this happen, naturally, sometimes so, no one panicked.


As the months went by bigger things, fell victim, to the darkness.


When livestock, such as cattle, hogs, horses and goats, were taken in the night, people noticed.


Eventually, humans were being dragged away. It was the demon. 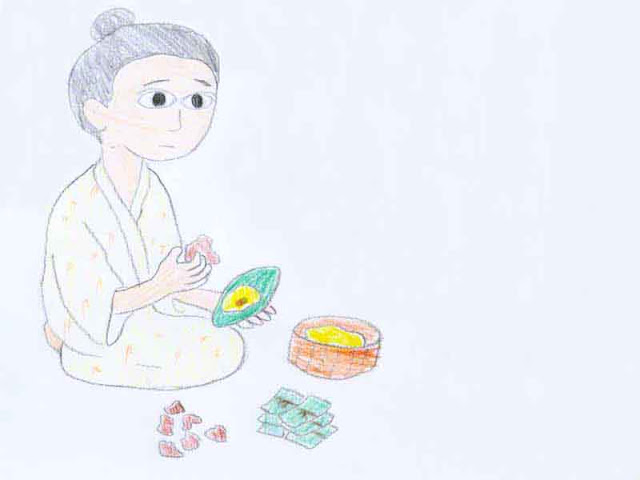 Something Had to be Done

Little sister suspected, the culprit might have been her big brother, turned ogre.


As a family member, she felt responsible, for the villager's grief.


Knowing the approximate location of the monster's dwelling, she devised a plan.


Her Nini (big brother) used to love the rice cakes, she prepared for him.


She fixed up a basket, loaded with steamed rice cakes, wrapped in gettoo leaves.


Inside the rice cakes, nicely concealed, were shards of broken roof tiles.


She hiked up the hill and, placed the basket of food on a rock, near the cliff edge.


Sweating from her journey, she approached the cave, thinking it might cool her.


As she approached the entrance, it turned her stomach.


The cave was dark, reeking of rotting flesh and death.


She called out “Nini, are you here?”


The demon appeared. He growled and grabbed his sister, to take into the cavern.


She told him about the rice cakes, sitting on the rock, outside. “Over there.” 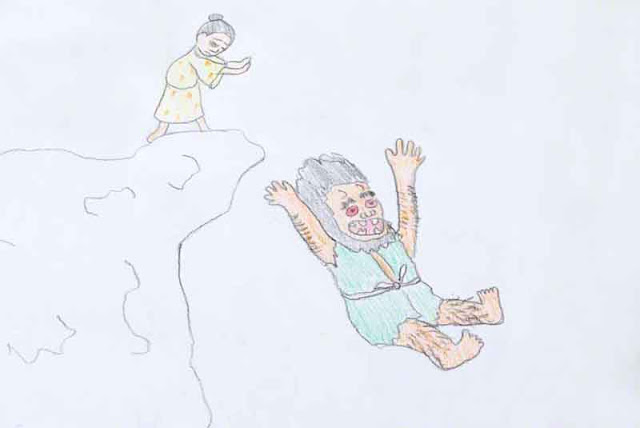 Sketch by Atsushi Maezato
She led the way, to the spot where the basket had been stashed and watched him eat.


He began devouring them whole, not paying attention, to what he was eating.


Soon, he began bleeding from the mouth, screaming in pain.


When he was writhing in pain and faced towards the sea, she shoved him off the cliff.


The devil, was gone forever and, ice cold wind blew in the girl's face.


By the Lunar calendar, it was the eighth day of December.


The tradition, of eating unimochi, continues in Okinawa, today.


Try some, without the tiles.