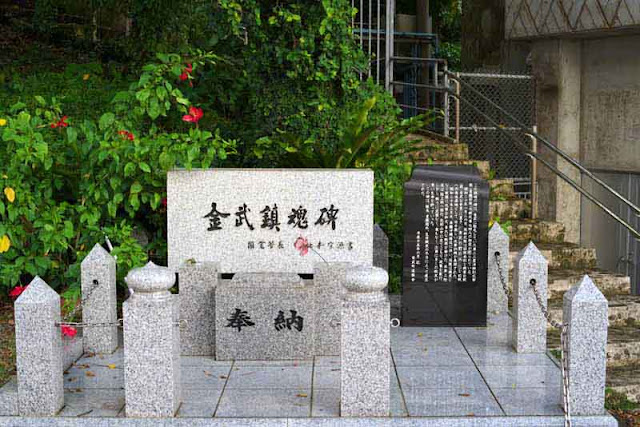 Here's a site I've passed by hundreds of times and, never gave it much thought.

Someone keeps the marble stones swept, cleaned and, places fresh flowers there.

One day, I used the photo option and translation feature on the smartphone.

That's when I discovered the significance of this monument.

The building, off to the right was a Japanese Army headquarters during WWII.

There were suicide motorboats, stationed in Kin.

Little, wooden boats, loaded with explosives and, manned by teenagers.

If you weren't qualified to fly kamikaze airplanes, you could still serve the emperor.

Learn how to crash, wooden boats into US ships and, you could be a dead hero. 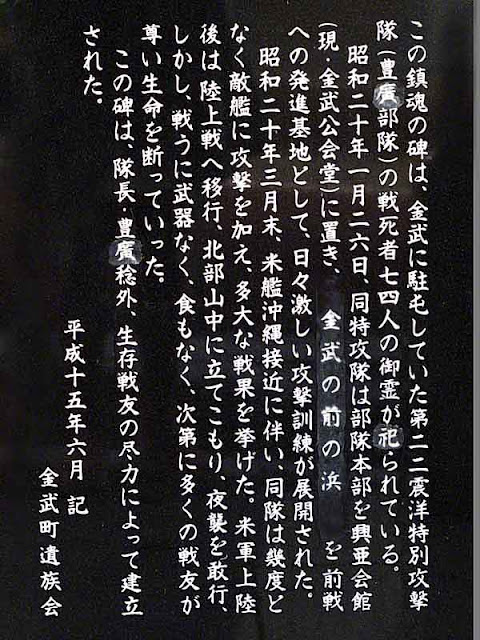 Going back, with the big camera, I shot this plaque for folks, to read.

If, you can't read Japanese, don't worry. I'm not too good at it, either.

Use the translate option and photo feature on your phone and, you'll see what, I saw.

Standing in the middle of the street, to take this photo was tricky.

Cars, would come along and, I'd have to move, to wave them by.

People, walking down that side of the road, were stopping, to avoid ruining my photo.

They're so friendly. I would greet them and, tell them, to go on and pass by.

This is a special place and, might be sacred, to some people.

After the photography was done, I had to do something to, not appear sacrilegious.

Walk over close to the stones, bow my head and, act sort of reverent.

Then, made like, I was saying a prayer for them, from me and my family.


More About Suicide Boats
Posted by RyukyuMike at 4:58 PM