Look at Some Characters and Faces from the Sanguacha (Images)

The Sanguacha is an event that takes place on Henza Island in Okinawa, Japan.

Further research and translation will be needed before I have a complete story to publish.

But, I can give you a peek at some of the folks and things I met during the Sanguacha. 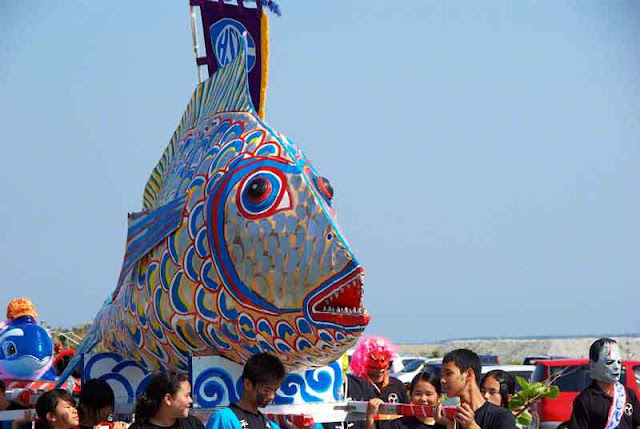 This brightly-colored fish appears to be the village mascot.

Much of the prayers and rituals are dedicated to the success of fisherman.

The whole entourage proceeds to a small off shore island to conduct ceremonies. 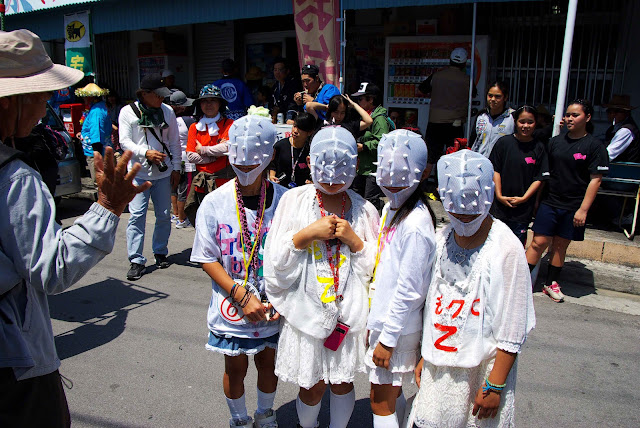 Villagers, of every age, participate.

There could be as many costumes as you would see in New Orleans Mardi Gras, for all I know. 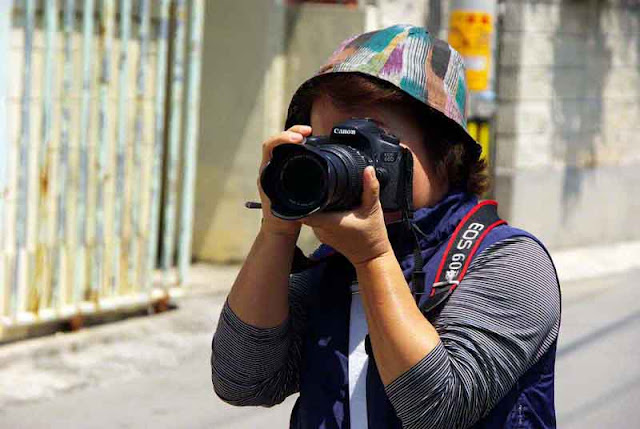 Every major brand of camera and video recorder are there, too.

It's always a pleasure running into those who know what they are doing. 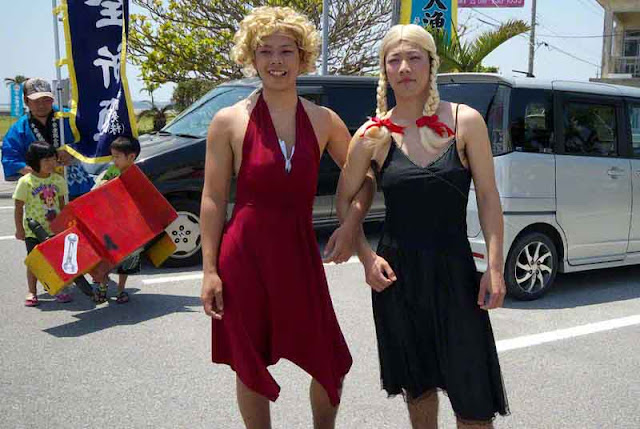 These guys cracked me up.

They knew how to stuff a bra but, forgot to shave the armpits. 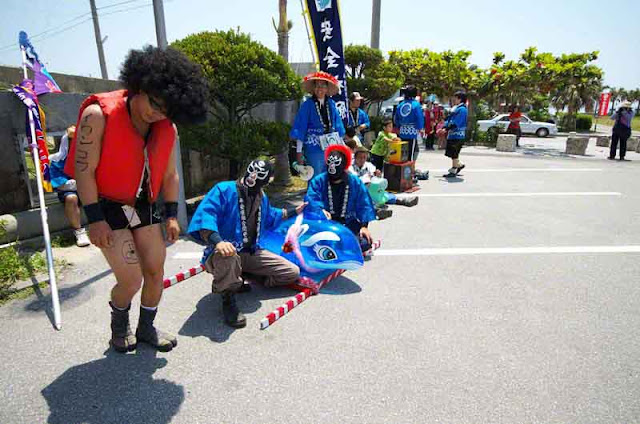 To keep confusion to a minimum, I won't try to name any of these characters. 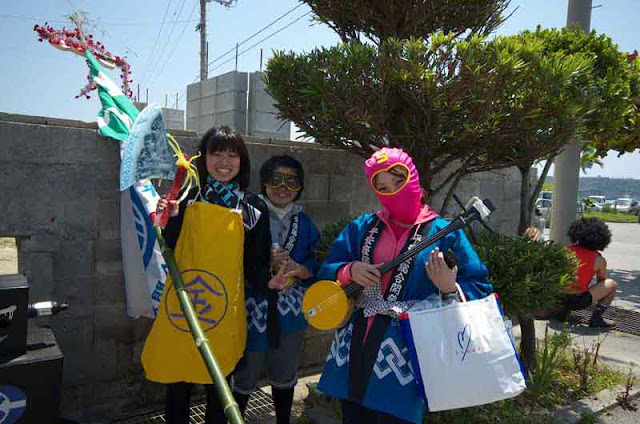 It would have been nice to get photos of everyone but, I had to move quickly. 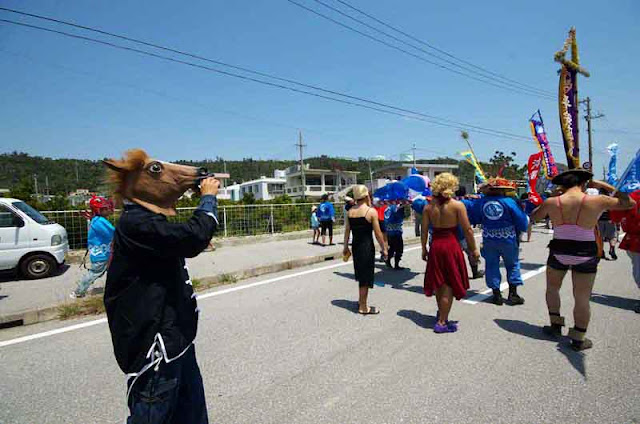 The procession covers a lot of ground so, there's no time to waste, sitting down. 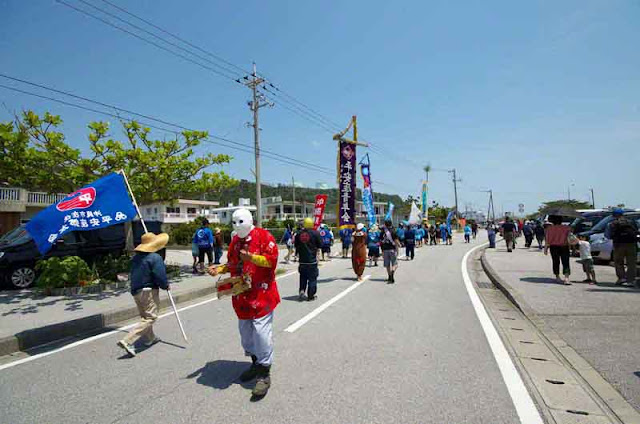 It was a really warm day.

Those people wearing rubber masks must of been awful hot. 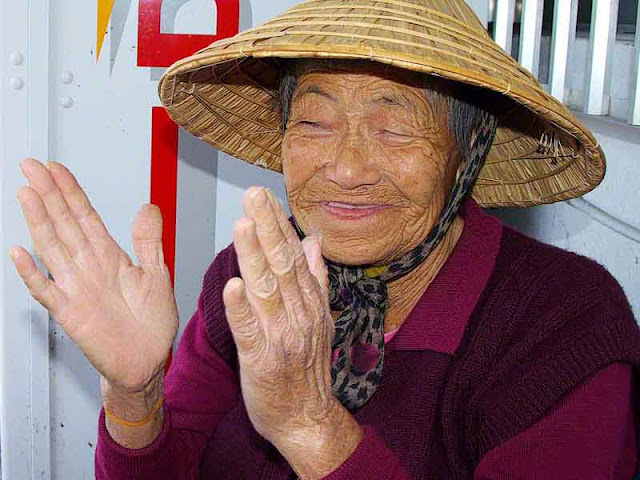 When the crowd stopped at a tent for some opening ceremonies, I took a break.

There was a drink machine, in the shade and I bought some cold water.

While everybody in the tent was praying or, whatever they do, I was over here.

This sweetheart invited me to sit down and cool-off.

And, we just entertained ourselves. 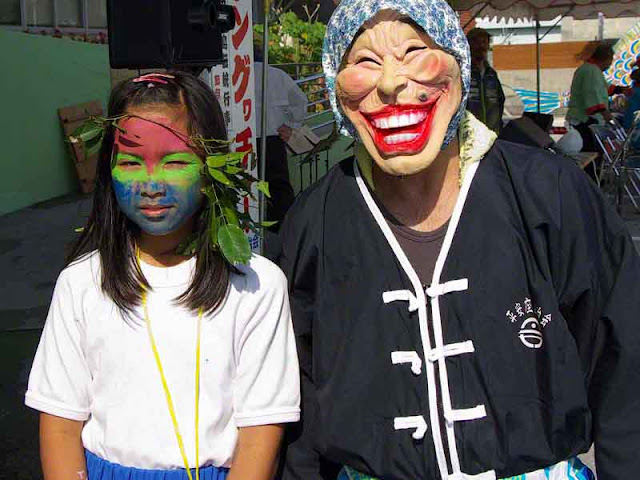 Everywhere you go at the Sanguacha you run into friendly people. 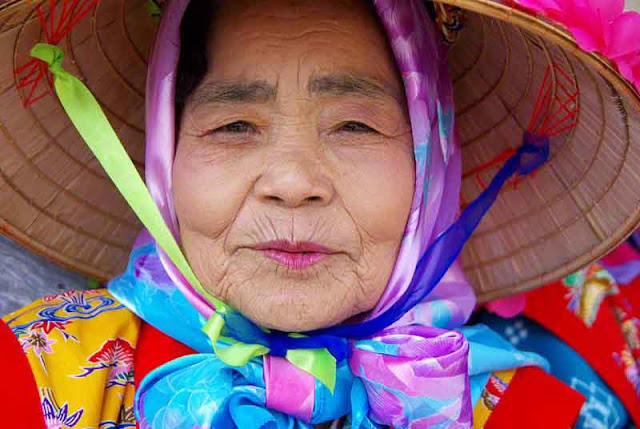 Sometimes, I pop-up from behind the camera and blow a kiss, to see what will happen.

Hah.  I better not let the wife see this one ! 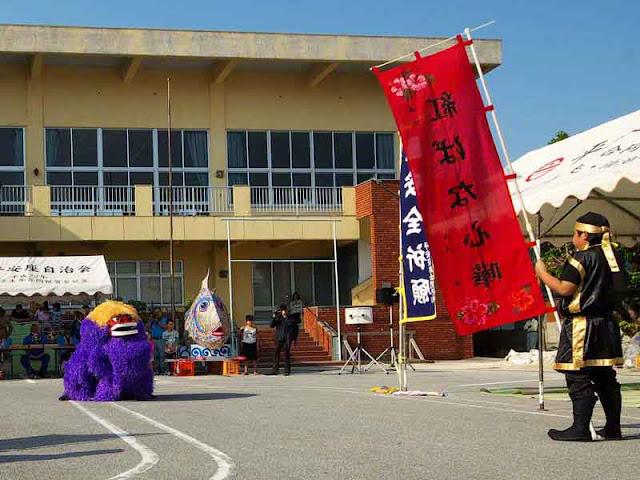 The Henza Community Center is where everything started and ended.

There were plenty of dances and performances, that probably lasted all night long.

One of my favorite characters, is the Shishimai; that purple guy above.

The two youngsters, under that fur, had to be roasting, dancing in that contraption.

This was where I took my parting shot, for the day.

Some Photo Printing Needs to be Done

A pile of photos of these faces and characters will be made for my return trip to Henza Island.

Maybe, I should just burn them to a CD for the village office.

Out of all the faces, I took photos of, I only came home with one, signed model release.

That means, I have to track some folks down for signatures if I want to get them published.

Can you guess who, from the photos above, already signed one ?

Posted by RyukyuMike at 5:17 AM

Wow, that looks like a lot of fun! Is it the same weekend next year? If so, I'm marking my calendar! Great photos, as always, but I'm still partial to the one of the lady in the pink lipstick. Can't wait to find out more about this event.
Theresa

Theresa,
Keep in touch and I'll try to let you know when the event takes place, next year. It's never on the same weekend. Has something to do with the lunar calendar and the tides, I believe.