Consider it a whirlwind tour with a camera, chasing the good light.

It consisted of, waking up Friday, Saturday and Sunday between 3 and 4AM.

We climbed aboard the New Izena Ferry at Unten Port in Motobu and sailed away. 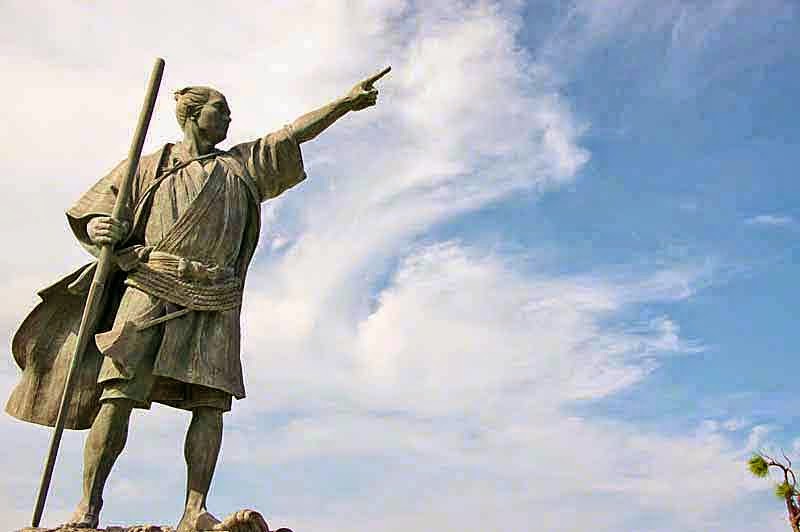 At the ferry terminal, on Izenajima, I photographed a tour map on the wall.

All the tourist brochures were written for Japanese or, Chinese.

But, the poster on the wall had some English descriptions for the attractions.

So, we decided to find the five sites that were listed, in language we could easily read.

First on the list was the statue of Sho En, pointing back towards Okinawa.

It was in a park, not far from the minshuku, we stayed at.

When Map It Okinawa dude and, I were leaving, I joked about a shot, I should have taken.

Driving off to scout another site, I noticed the statue had a straw hat on its back.

One source, says he wore his topknot sort of lop-sided.

That would have shown up if, a photo was taken from the rear of the statue.

Then, we'll have to decide whether it was a fashion statement or, he had a bump on his head.

Some other conflicting information exists, concerning this Ryukyu king.

One source says he came from Iheya, another Izena Island.

The folks on Izena, sure seem proud of his heritage and, that fact he became a king. 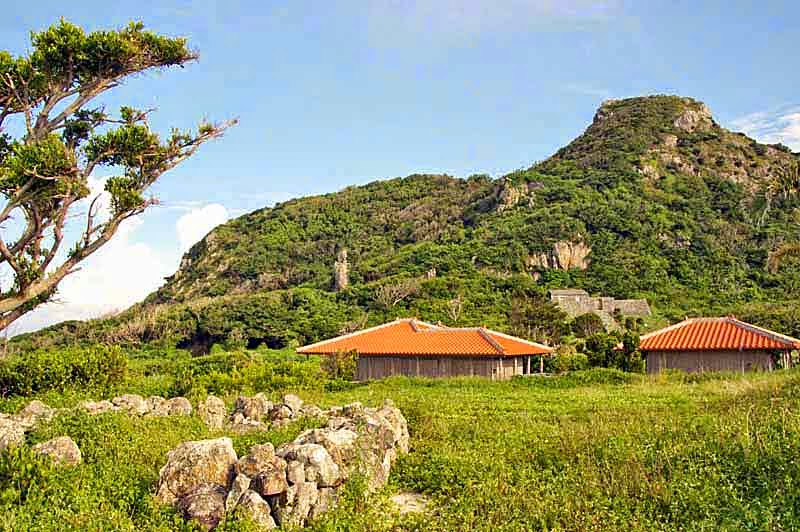 Izena Castle Site is a must-see, for any one visiting this island.

The castle, also known as, a gusuku, looks like a big pile of rocks, about 100 meters tall.

There doesn't appear to be any rooms to hide in so, it's different than most fortresses.

Map It Okinawa, climbed to the top and saw some sacred sites along the way.

A summer storm (thunder, lightning and rain) hit while he was up there.

My cameras got thrown in the car and, I hid under one of those tiled roofs.

One of these days, I'll climb, when its not raining. 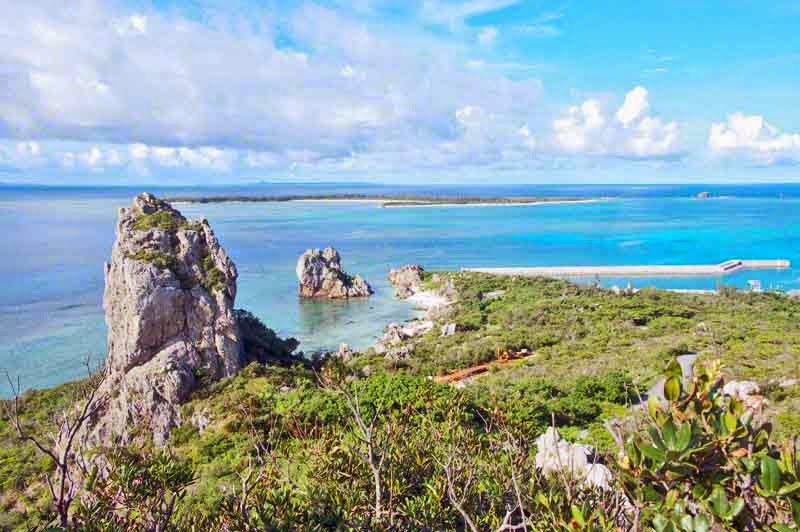 Castles and royalty statues are alright but, I liked this photo best.

Agi Gitara and Umi Gitara are two rocks in the scene above.

Agi is still attached to land; Umi is the one in the ocean.

The story goes:  They were two lovers who wanted to become one, with each other.

When they died (some say suicide) the gods hooked them up for eternity.

The gal rock (in the sea) and dude rock on land, will see each other, forever, from a distance.

Anyhow, this was a challenge, shooting this photo and, I want to do it again. 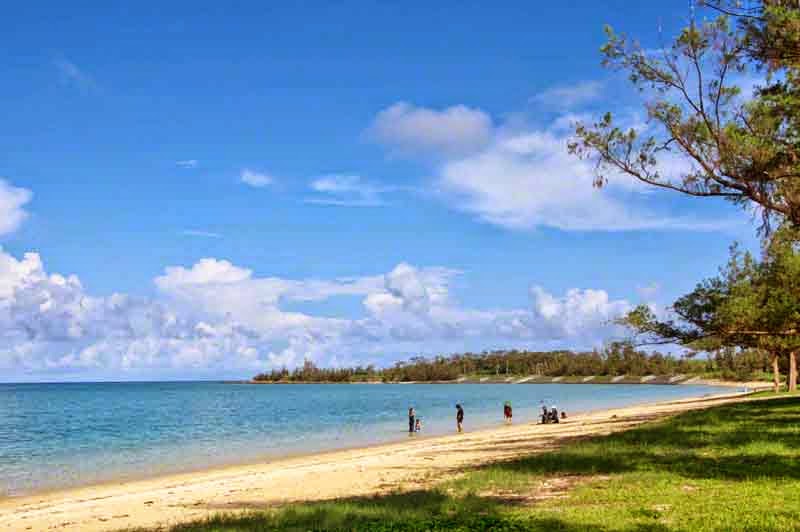 Izena Beach is a great place to visit and get some sunshine.

They have campgrounds, toilets, showers and, the price is right.  It's free.

There weren't many people there when we visited so, we may have to go back.

What if a bunch of girls in bikinis, showed up ?

These are things, you must consider. 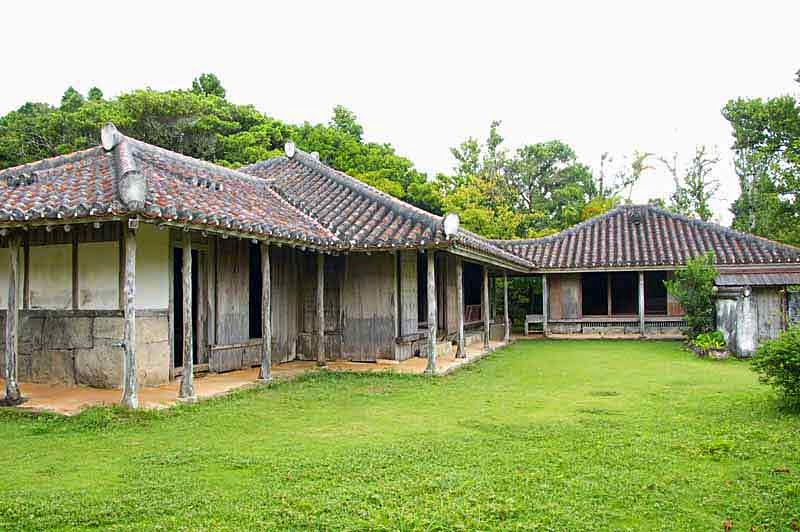 The last tourism location we found was the most difficult, as far as searches go.

There were signs posted along the highway and, they had arrows pointing directions.

If you are just looking for old traditional Okinawan homes, you'll find plenty.

This one is special. The buildings and grounds are huge.

Not much (in English) can be found via the internet. I will find out more, later.

There are some sacred sites and important trees associated with the area.

So, that gives me another excuse, to return to this special island.

On the island of Izenajima, they have internet access.

Just as soon as, I got off the ferry, I noticed Wi-Fi access signs in the terminal.

In the backpack, with all the rest of my traveling gear and camera stuff was a laptop.

To make the most, of my time on the island, I stayed un-tethered.

Chasing the cultural, historical sites, along with sunrise and sunset locations was fun.

But, it requires some, mingling with the locals, who know the island.

We were out there, sampling the local spirits, past midnight, daily.

With only 3-4 hours of sleep, each night, the internet, didn't seem all that important.

Back at the office, I'm online, again. And, have jackhammers out front of the place.

There's one last reason, to go visit Izena Island, in the near future !