Day Trip: Grab a Rope in the Guinness Record Tug of War Okinawa

The assignment, was to write a one day trip, for someone flying, to visit Okinawa from Japan.

With the Guinness World Record Tug, just a few weeks away, you may want to read this.

If you dislike large crowds, just look at the photos and, avoid the event ! 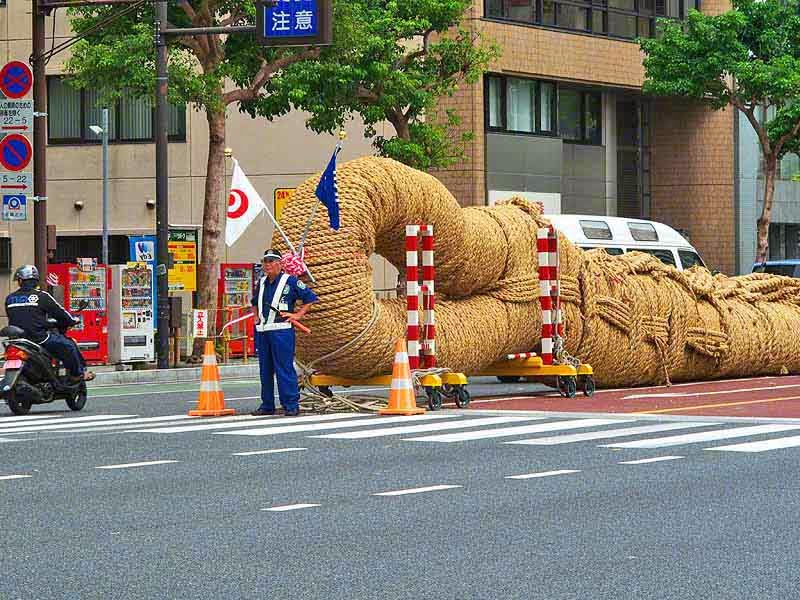 
Hop on a plane for an early morning flight out of Tokyo in early October and you can witness the excitement surrounding the World Guinness Record Naha Tug of War. It’s a once a year event where you can participate, or just watch, a crowd of over 15,000 people pull a tug of war rope weighing over 40 tons. The scene in the street, numbering well over a quarter million people, is a sight in itself.

Tug of wars have been held on the islands of Okinawa since the 1600’s in the belief they would insure good harvests of rice in the fields, as well as, a bountiful catch and safe journey for fishermen at sea.
The Naha tug of war has evolved to become a cultural event believed to bring prosperity, good health and fortune to the residents of all the Okinawa islands. The rope was first recognized as the world’s largest, consisting of natural fibers, by Guinness World Records in 1995. 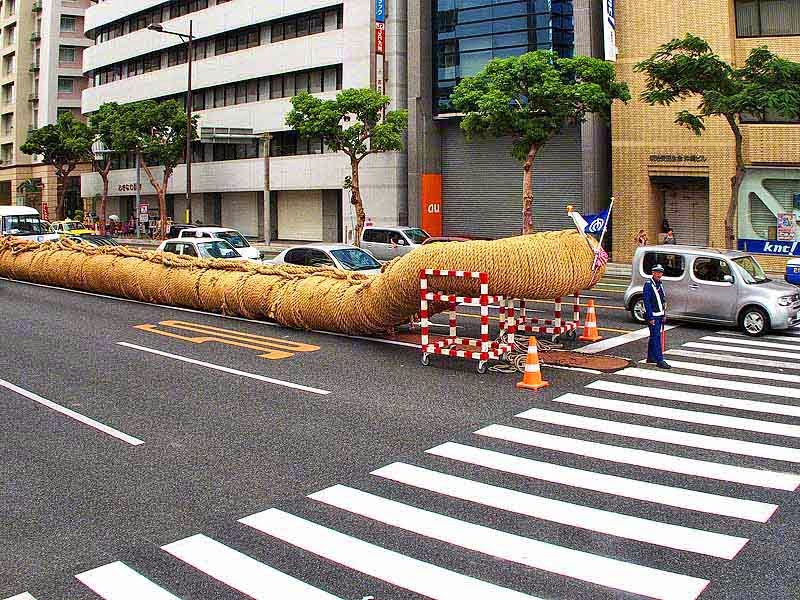 There’s More to See than Just a Tug of War

The event takes place on HWY 58 just a few minutes drive north of Naha International Airport and that is a great place to view, or photograph the massive rope. The monster is placed in the center of the highway, the night before, and crowds of observers won’t start swarming the place until mid afternoon.

A few minutes walk from the highway, on Kokusai Street (International Avenue) is where the festivities begin, at noon.  There are sights and sounds you won’t want to miss.  A parade is held which will give you a taste of Ryukyu (Okinawa) history and culture, in three hours that would take ages to absorb by reading books watching videos, or traveling throughout the Ryukyu Islands Chain.
The parade showcases some brilliantly colored kimonos, traditional classic dances and a dance, seen only in Okinawa, known, as Eisa.  The sounds of drums, horns, gongs, firecrackers, stringed instruments and music piped over loudspeaker systems fills the avenue and like many other observers, you’re welcome to chant along with the performers. Just memorize the words “Ya sa sa” and “Hi e ya” and learn to whistle like a whippoorwill, only a lot louder, and you’ll fit right in.
Some of the other activities you see include martial arts performances by youth, dancing lion-dogs (known as Shishimai) and a Chinese Dragon Dance. One event, you may want to climb higher to witness and capture on camera, is the Parade of Flags.  Young men demonstrate their strength and skill at balancing a huge bamboo pole displaying a banner representing their district in the city of Naha.  Climbing some stairs or watching from a balcony gives a better view and assures your safety, should a flag come crashing down in your direction. 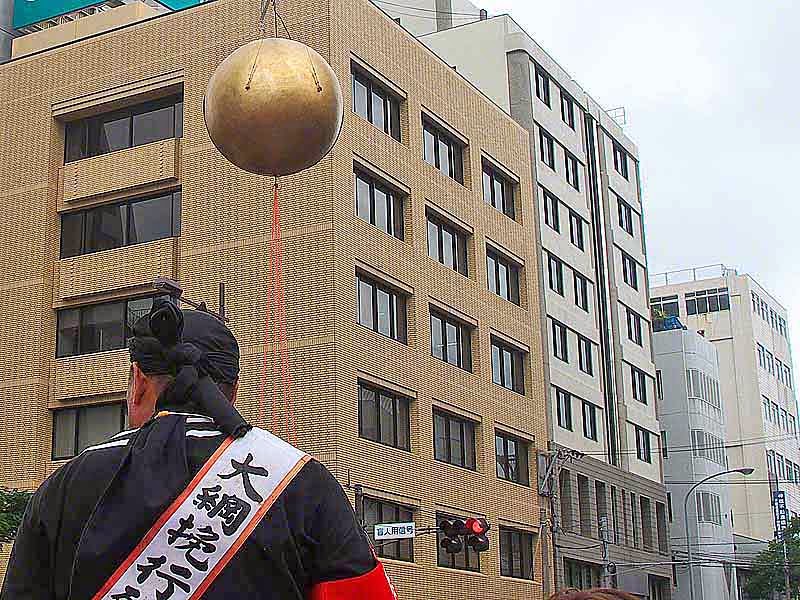 The Tug of War normally takes place on the Sunday prior to Japan’s Sports Day, which is the second Monday in October. It’s always best to check with a travel agent or visit the official site, in the event inclement weather causes sudden changes to plans.
Opening ceremonies and a large gathering of people begin on HWY 58 around 3PM so it’s a good idea to start jockeying for your position about that time.  There are speeches given, karate demonstrations, music played and more activities with village banners but, the World Record Tug is what you want to see. 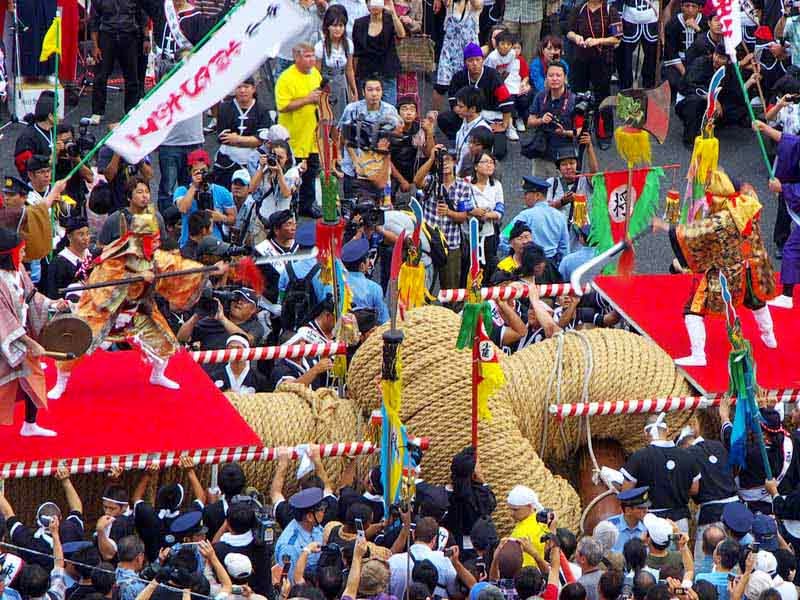 Shortly before 4 o’clock is when activity with the rope begins. The rope is in two sections which must be joined and they face east and west, lying in the street.  The loops on the ends of the ropes are designated male and female. They are joined and a large wooden peg is inserted through one of them to tie the two ropes into a single length of rope for the tug.
Men, representing the royalty of the Ryukyu Kingdom and dressed in period costumes, climb atop the east and west sections of the rope and issue challenges. This is another good time to climb to a higher level for photography, as the crowd begins to surge closer in anticipation. If you’re there to pull, the masses will help snuggle you closer. 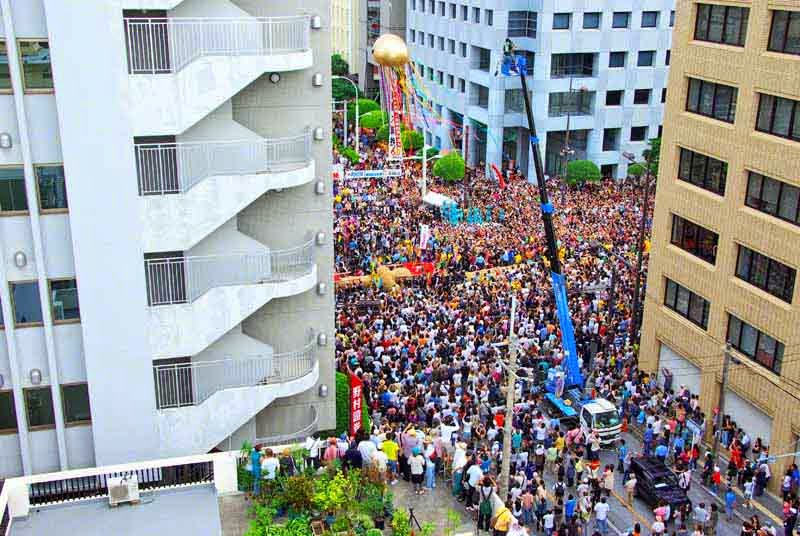 After the shouting and dueling match between the kings takes place, a gold ball above the crowd opens, depositing balloons, streamers and confetti.  A gong sounds, the crowd surges even tighter, and the tug begins. 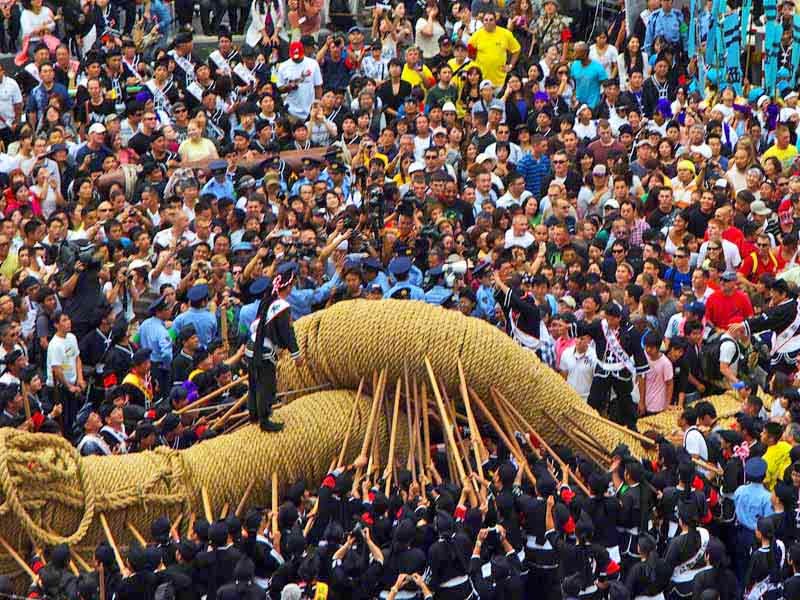 A sea of humans converges on the rope tugging, shouting, straining and trying to get the five meters movement in their direction it takes to become the winner. The only part of the rope that remains visible to photographer, during the tugging, is the ends of the rice straw rope with the loops on them.
This is where I’ve learned to climb to higher elevations in the pursuit of a memorable photo. 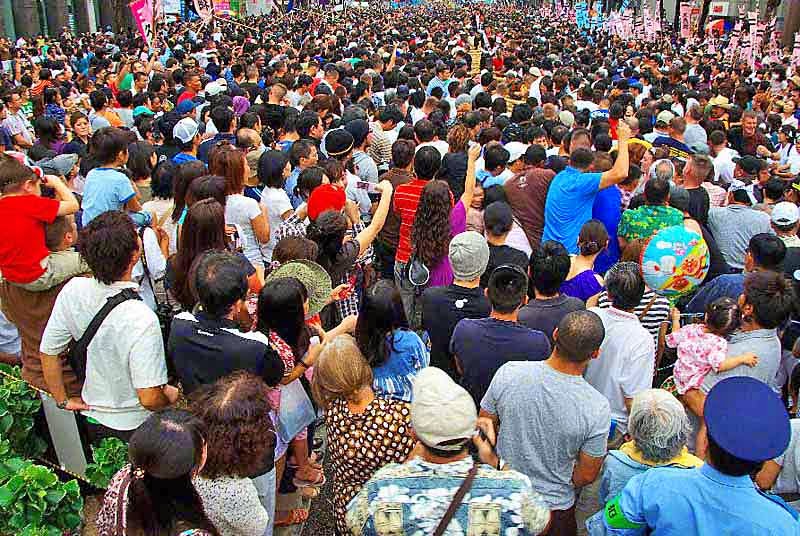 Anywhere above the crowds, a stairway, balcony or a rooftop will do. At street level, the rope disappears among the crowd.
The tug of war ends when a team from either the east or west side of town manages to pull the rope five meters in their direction. If neither side manages that within half an hour, the competition ends in a draw. That has happened 14 times over the years.

Excitement When the Tug-O-War Ends 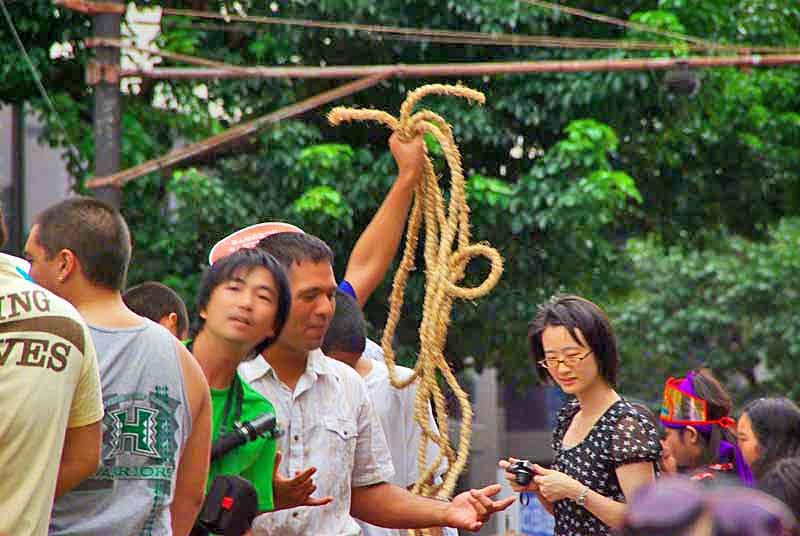 A winner or draw is declared. That’s when the fun begins. Pieces of the rope are supposed to bring good luck to your family. So, everyone wants some to take home. Hundreds of thousands of people, some who weren’t even there to watch the event, show up and converge on the monster to grab a few strands of it. 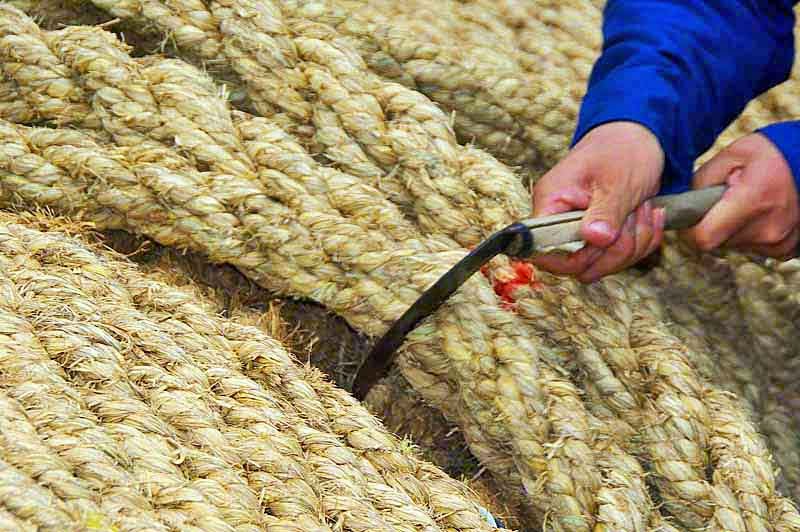 Couldn’t take a knife on the plane, could you?
Not to worry. Uniformed members of the Naha Tug of War Committee are the only persons allowed to have knives at the event. They cut strands and toss them to the crowds.

Some things I recommend for this once a year, one day event, after having done it a few times:
Wear comfortable walking shoes.
Bring a light jacket in the event it gets chilly or rains.
A backpack is the only luggage you will need.
Grab meals at any of the several Family Marts located conveniently along the routes you’ll be taking.
Yen is the currency to bring. Taxi cabs and vending machines generally, don’t accept any other currency.
Returning to Naha Airport for a meal before flying, you’ll get excellent food at reasonable prices. 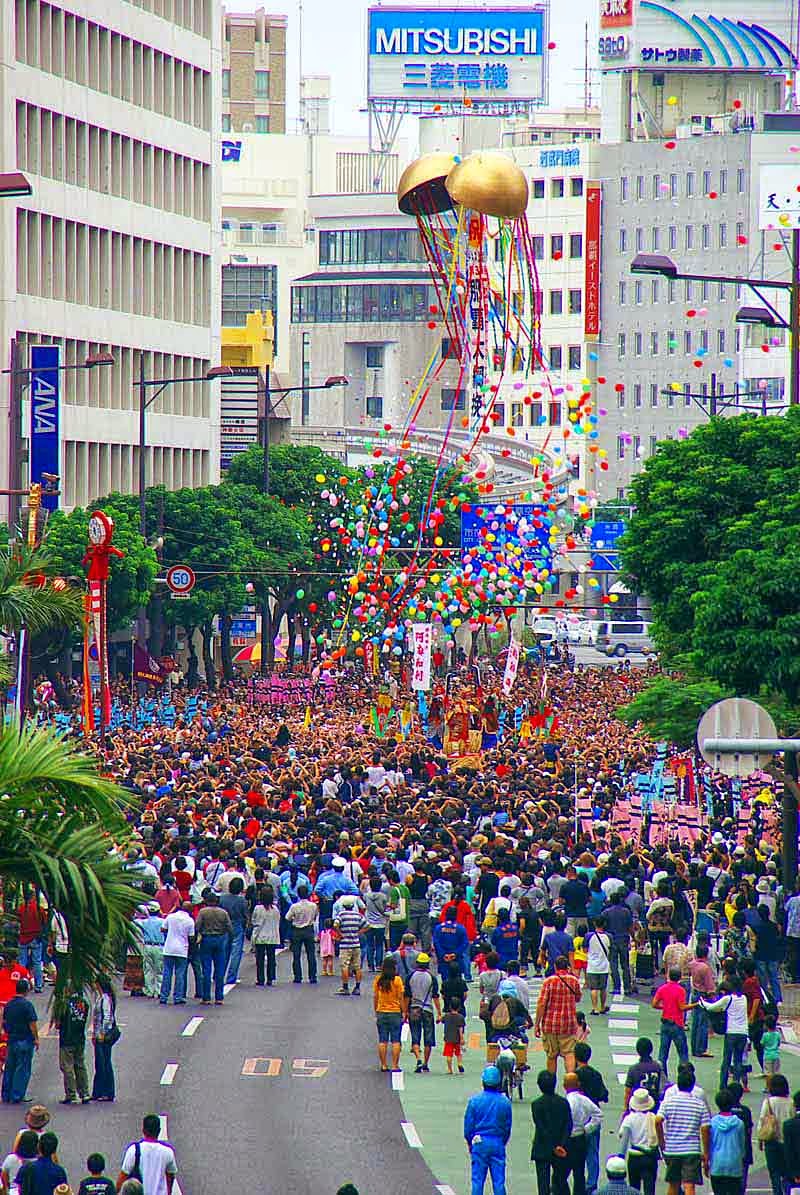 Posted by RyukyuMike at 5:46 AM