This Dude Turned Pufferfish into Lamps !

These have to be some of the ugliest and deadliest fish, I've ever seen.

In Japan, they are called Fugu and, are considered delicacies especially, if you like to gamble.

So, you have to be a specially trained sushi chef, if you want to serve them. 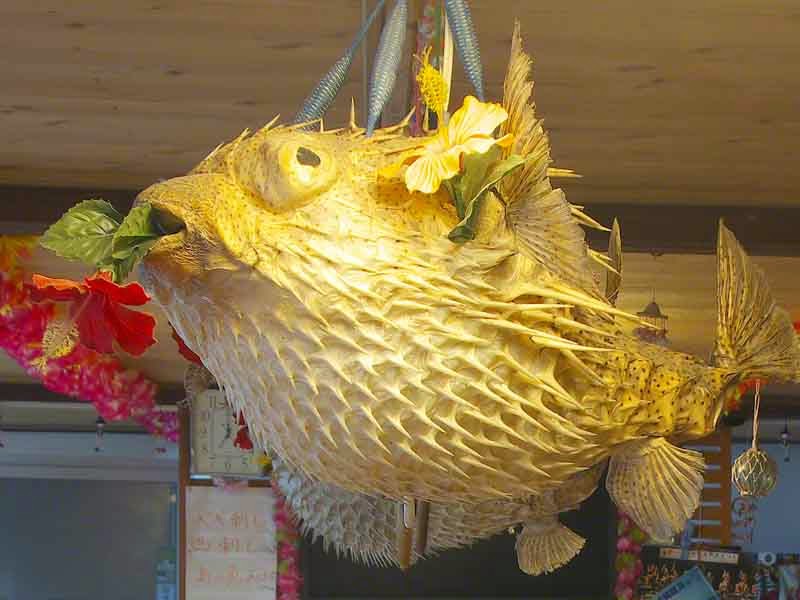 The place, I stayed at on Izena Island has them as hanging lamps in the dining area.

They are each about the size of a football and, make nifty decorations.

Not a big fish eater, I didn't ask if they had any on the menu.


Some Facts About Pufferfish

There are over 100 different types of them.

They are also called toadfish.  Tetraodontidae is the scientific name.

They live in mostly tropical waters.

When a predator, comes along, they inhale lots of air and water and expand their volume.

The spikes sticking out of them contain poison and should scare an enemy away.

Some sharks and snakes, eat them anyway because the poison doesn't bother them.

They come in sizes ranging from 2.5 centimeters to over 60 centimeters.

That's from about 1 inch, to over two feet.

They sure make pretty lamps but, you'll never catch me eating one.

Tomatoes, lettuce and hamburgers, is what I'll be sticking down my throat.

Posted by RyukyuMike at 1:21 AM