This gastropod is another example of humans messing with nature.

It's a poisonous critter, some dingbat, brought to Okinawa, to be used as a source of food. 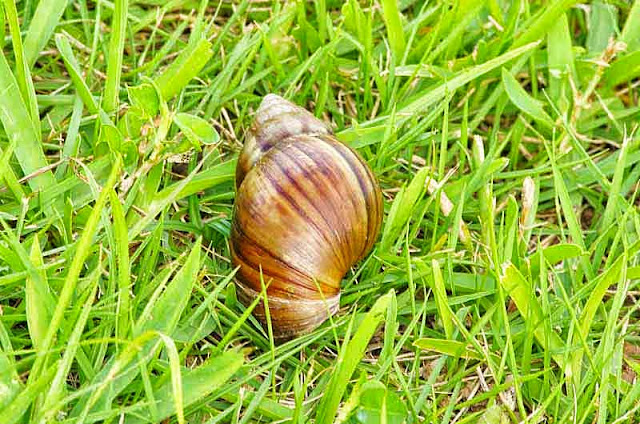 If you see some little footballs, crawling around in the garden it could be one of these.

It' a good idea to wear gloves when handling them if, you don't want to catch meningitis.

For example, should you decide, to toss the little footballs over your neighbor's fence.

Scientists, would call them Achatina fulica. The Wall Street Journal says they're aliens.

They can chew their way through a stucco wall and, eat over 500 types of plants.

Each snail has both male and female thingies, for reproduction.

It's pretty disgusting reading, how they do it so, I won't write about it.

Instead, I'll let this naturalist, Mark Brazil tell you:

"In this case the romantic gastropods may spend hours in courtship, first tentatively touching tentacles and sensing, then engaging more (how shall I put this?) — moistly. At this stage of their relationship they flow onto and around each other, writhing in slow motion in pursuit of a common goal — as I recently observed in Brazil between two of the largest snails I have ever encountered.

As part of the mating process, excited snails vie to fire love darts into each other, akin to being stabbed at close range with an arrow. These darts carry hormones that are involved in the reproductive process, and their firing is a precursor to copulation and sperm exchange."

The snails are in the top 100 of invasive alien species, according to Encyclopedia of Life.

The Florida Department of Agriculture wants your help, eliminating the creatures.