A Scene From Within UNESCO Nakijin Castle Walls Okinawa 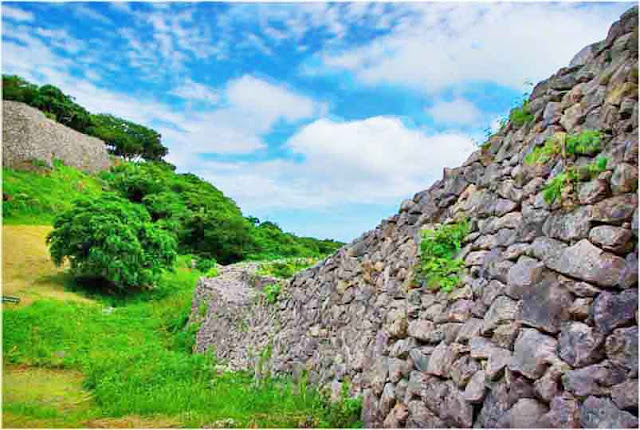 This is a photo taken from within the walls of Nakajin Castle during the month of July.

The position this was photographed from is probably one of northernmost points that can be reached inside the castle walls.

Experimenting with the Pentax KD 10, there were 3 shots taken at f/22.

Shutter speeds were adjusted to get one photo at perfect exposure, one at -1 on the light-meter and one at +1.  Then, combine all three in Adobe Elements to create an HDR photo.

What I didn't realize, at the time, was the clouds were moving fairly quickly.

So, this is one of those photos scheduled for the recycle bin.  My clouds got smeared.

The newer models of most DSLRs, and some point and shooters, have HDR capability built in to them.  I haven't tried the HDR Mode on any of my cameras, yet but, will, one of these days.

It would be interesting to do a comparison between HDR photos created in-camera and HDR shots created manually, I think.

All I have to do is figure out where those camera manuals sneaked off to and read the darn things, one of these days.

We're having some weather in Okinawa, Japan this week that makes a body feel like staying indoors and reading.  It just might be a good time to getterdun.

Very Surreal Mike! Like the composition. The pictures looks something out of the Wizard of Oz