A Little Too Close to Home (Photo) Typhoon Damage 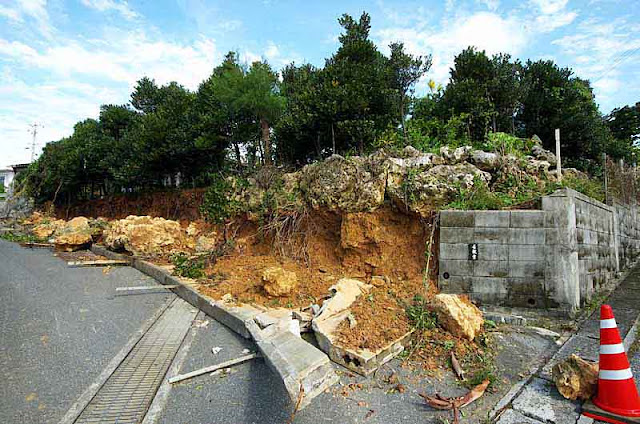 This Is Some Damage Caused By Typhoon Sanba

We were out celebrating the Missus's birthday last night (ahem-ahum) a few days late.

Sometimes, I feel sorta guilty cuz I'm away from home, way too much, with the cameras.

So, I splurged and took the wife out for a steak dinner.

Supposedly, I Had Already Covered The Typhoon Damage

Shucks, I bet I was on my fifth beer and maybe second, or third bar when I heard about this.

It's less than a quarter mile from my house !

The Alert Reader Who Notified Me Must Remain Anonymous

That's mostly because I was on my second, or third bar and maybe fifth beer when he told me.

Anyway, he, or she, will remain anonymous until I figure that part out.

About The Crack Of Dawn I Went To Investigate

First, I harnessed-up the dogs.  No cameras when you're walking three of them.

The Husky mutts are getting old but, when adrenalin kicks-in they act like they're on steroids.

Whatever is in dog adrenalin, we should get some of that for old ladies medicine. Hah !

Anyway, back to the story.  Within ten minutes we were at the roadblock.

They had traffic cones telling you not to go there, on both ends of the road.

So, that's where we went. Right on down to the bottom of the hill.

So, I said "Mush you huskies. Get home, Quick". I needed my cameras.

At the house I unharnessed the two beasts and the little white rat the wife calls her dog.

And I rushed off to the office to grab two cameras and tripods.

There Are Fifty Shots Of This Typhoon Damage In My Files

These folks are my neighbors.

That's just a little too close to home for me.