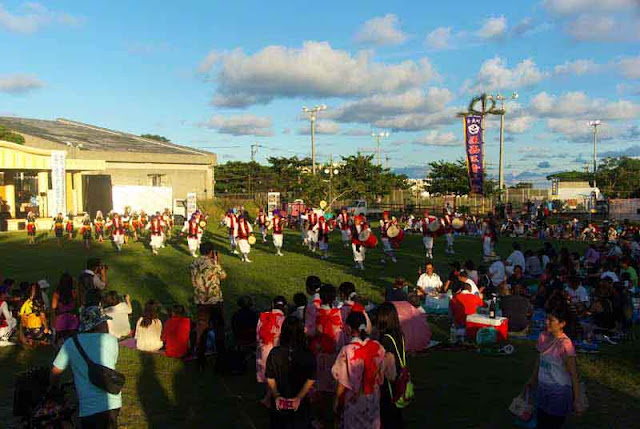 Originally scheduled for August 26th, Typhoon Bolaven changed the plan.
The Kin Cho Eisa Matsuri (Festival) was held last night.
This photo was taken as the sun was setting behind the hills causing some high-contrast lighting.
Nakagawa, the district of Kin Village where the event was held, is across the river from me.
It sure would have been nice to stay after my photography was finished.
Folks up in Nakagawa really know how to party.
Every time someone offered me a drink, I told them I couldn't because I was working.
They respect that and leave you alone.
Good people.
Rarely will you catch me out with a camera and drinking at the same time.
Saturday night was one of those occasions.
So, when the Eisa Matsuri was over, I dropped the cameras off at the office.
And, went drinking without them !
Visit my homepage for today's Feature Photo

Posted by RyukyuMike at 1:28 AM