Gross National Happiness and Other Notes

Where Flip-flops Meet the Road

Everything you need to know, isn't readily available on the internet.

Sometimes, you can learn more in a watering hole, than you can by researching online.

So, off I went on a mission to determine the starting date of the upcoming Chinese New Year. 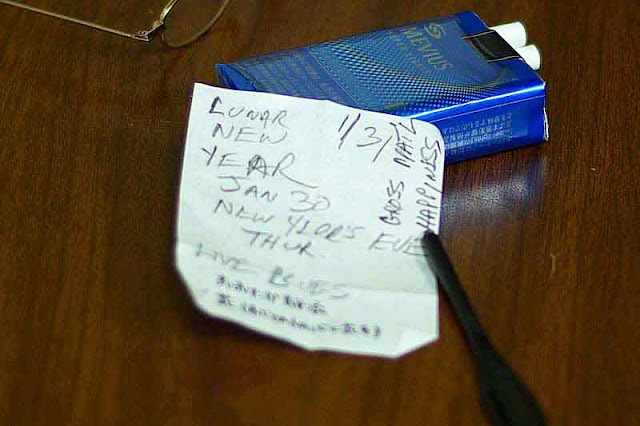 There's my notes. Don't laugh. It's the old guy's version of the iPad.

While discussing the dates of the Lunar New Year with some locals, the TV was on in the bar.

It was a Japanese channel but, Gross National Happiness, showed up, in English.

So, I had to scribble that one down.

See the golf pencil ?  Well, I'm not a golfer.  I just hang around golfers sometimes.

They give me those little pencils that fit in my iPad, for free.

Not bad people to get to know. But, I still like girls better.

That information was gathered in the very first bar I went to.

Several more bars are on my way home so, I thought it would be a good idea to stop in a few more.

The real world often imitates the internet.  It's best to verify your sources.

The Year of the Horse 2014 starts February 4th, I found out, at another place.

My old fashioned iPad was running out of space so, I memorized that information for you.

Now, here I am, just as confused as everyone else, about this Lunar New Year.

So, I figured, it was time to quit worrying and do some more bar-hopping.

There are plenty of places with no golfers in them.  And, I like beer.

As the night wore on, every once in awhile, I'd ask somebody about the next New Year.

If you ask 5 people, you might get 5 different dates.

Along Came This Bar With A Beauty

It was a little chilly so, she had one of those winter scarfs, wrapped around her shoulders.

Nothing was revealed there.

After the place warmed up, she took the damn thing off.

By that time, I had done enough investigating and was getting sleepy.

So, I finished my beer and took my Gross National Happiness home.

Posted by RyukyuMike at 2:00 PM