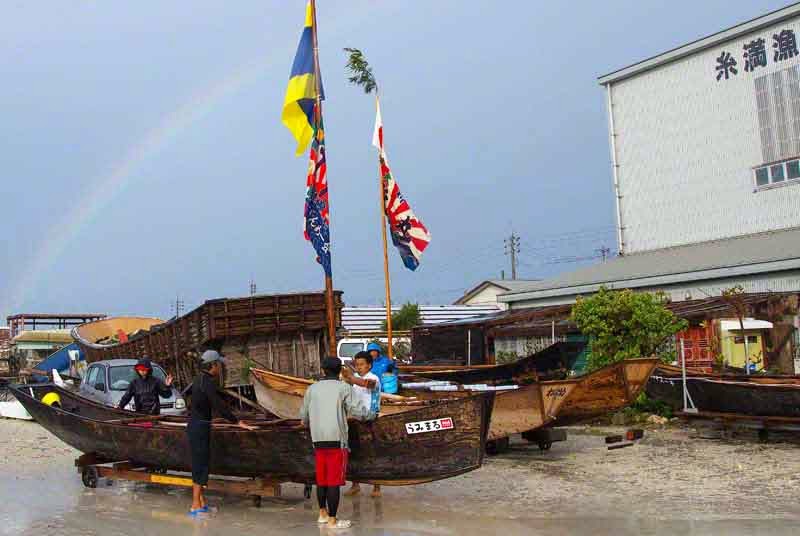 An invitation was extended to go with the Umi Maru for this event.

When a rainbow appeared above the boat, I knew that was a sign it would be a great day. 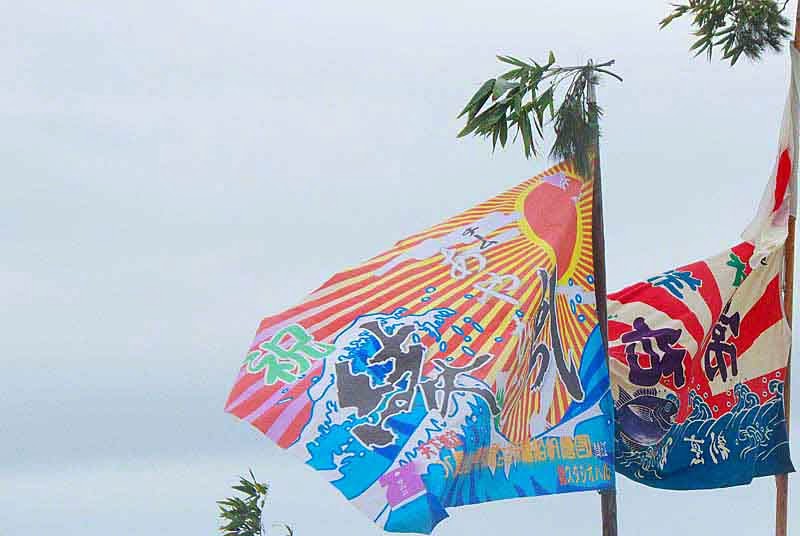 The weather was kind of iffy so, I figured I'd shoot some flags while still ashore. 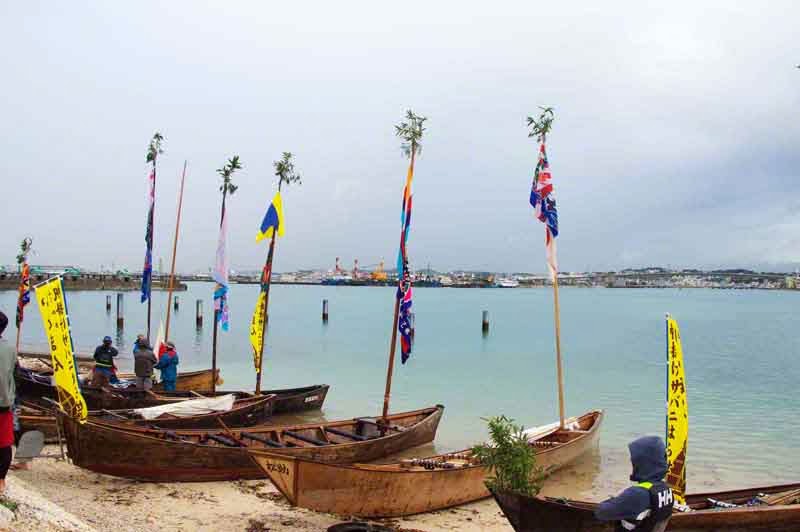 Each boat had displayed banners, bamboo and pine, hoping for a good year of fishing. 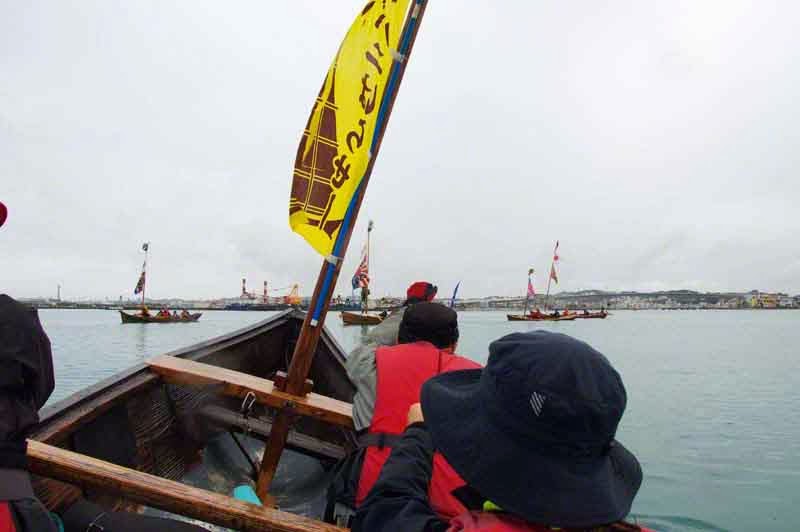 This is me shooting photos from aboard the Umi Maru.

They outfitted me with a life jacket and told me where to sit for the ride.

I'd show you a photo of the boat tilting the other way but, don't want to make anybody seasick. 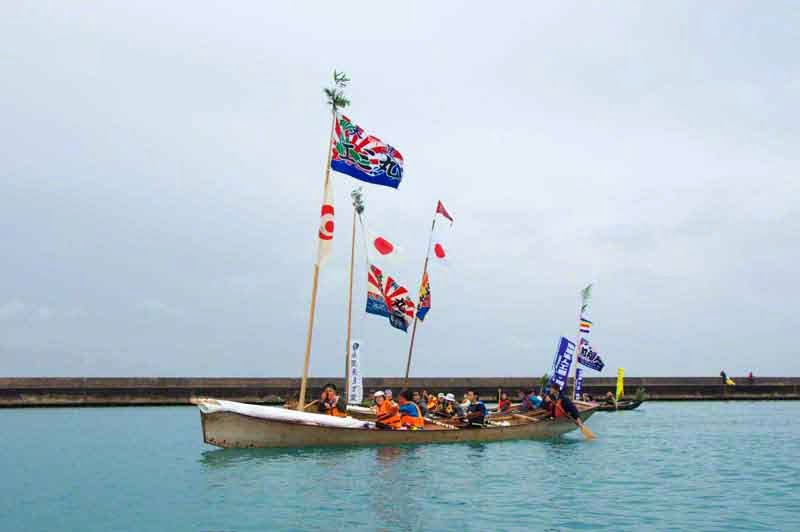 The crew on the Umi Maru consisted of two guys and two girls with paddles.

Those sabani boats are heavy but, move incredibly fast. 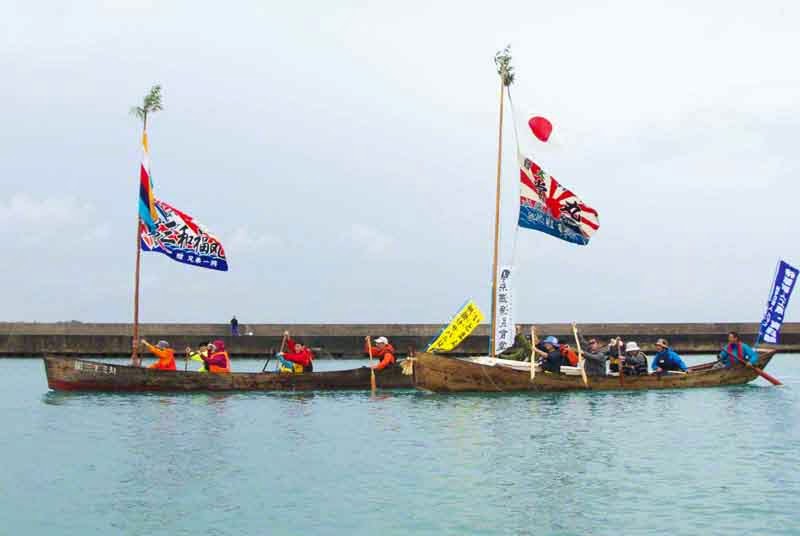 Trying to get photos of every boat, in good light, was a real challenge. 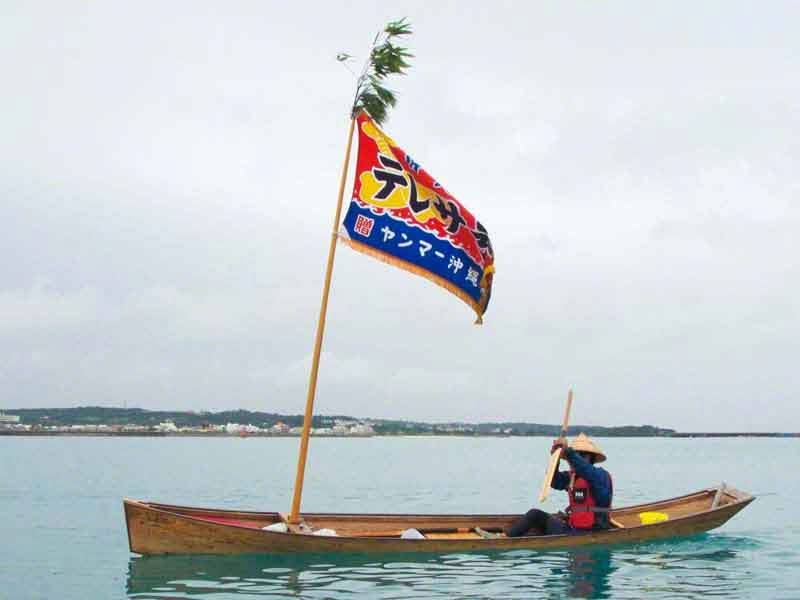 When I got a chance, I snitched one of the gal's paddles.

The camera on a tripod was held between my knees so I could paddle away. 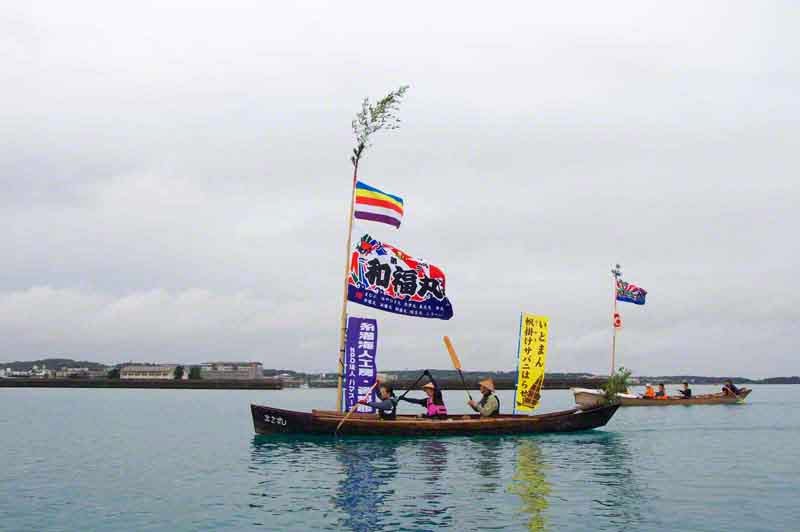 It doesn't take much effort to get these boats moving. 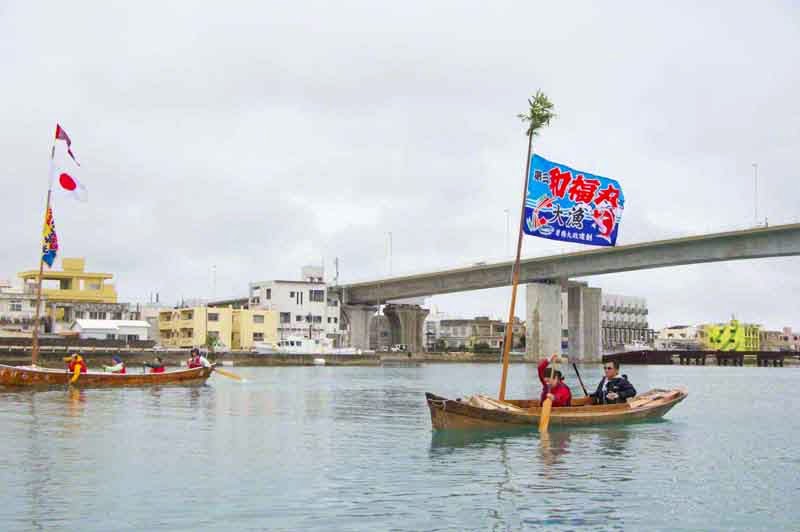 A husband and wife could do it, if they got together. 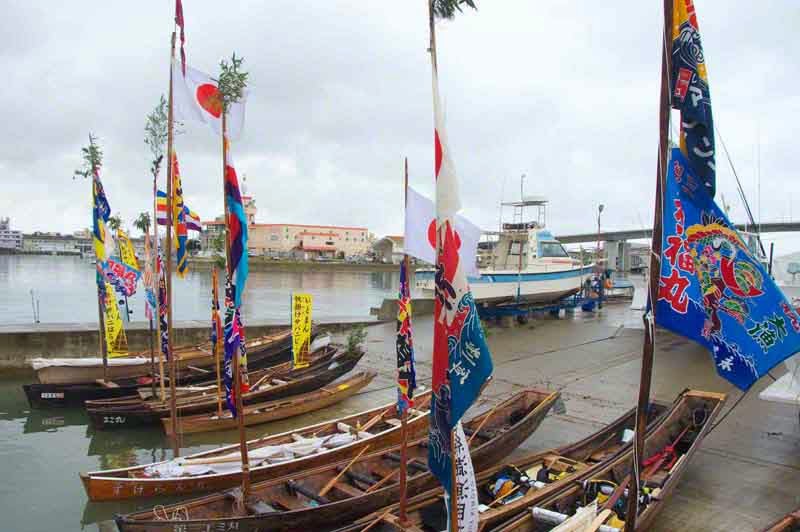 When we got to the other end of the port, I walked funny, for awhile.

Sort of a drunken sailor walk, because the earth don't move like the ocean. 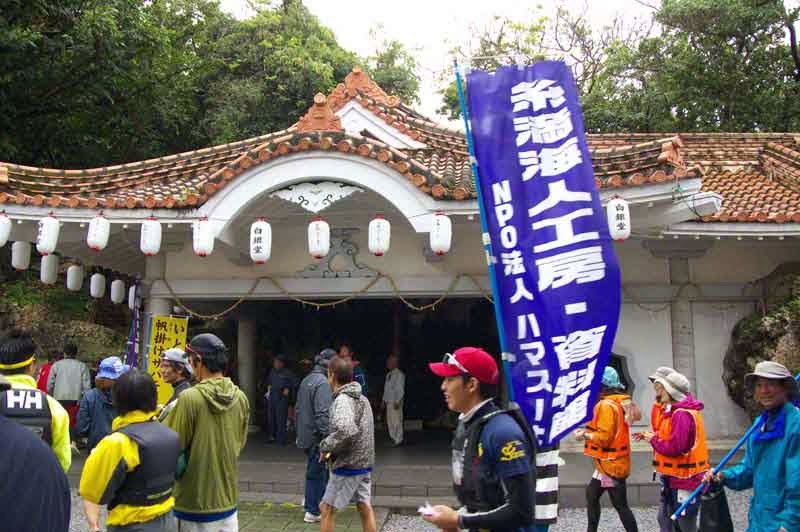 Everybody paraded up to a shrine for Lunar New Years, prayer and offerings. 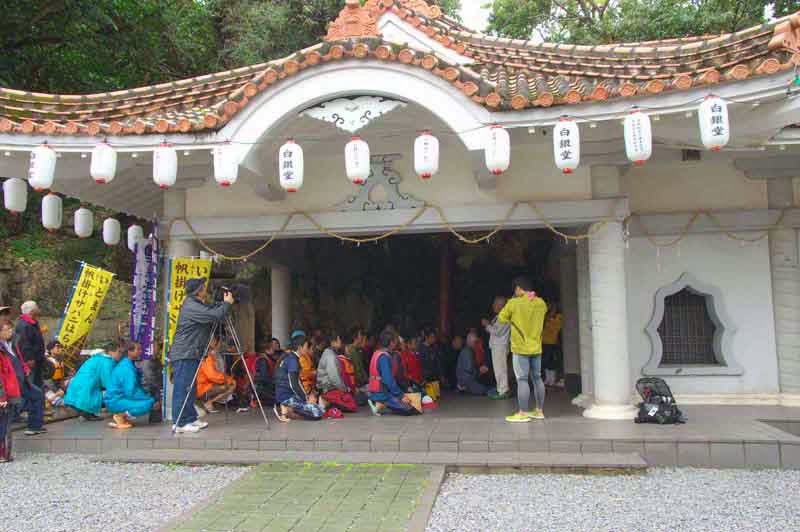 They are Uminchu, "people of the sea" and, they come to this shrine to worship. 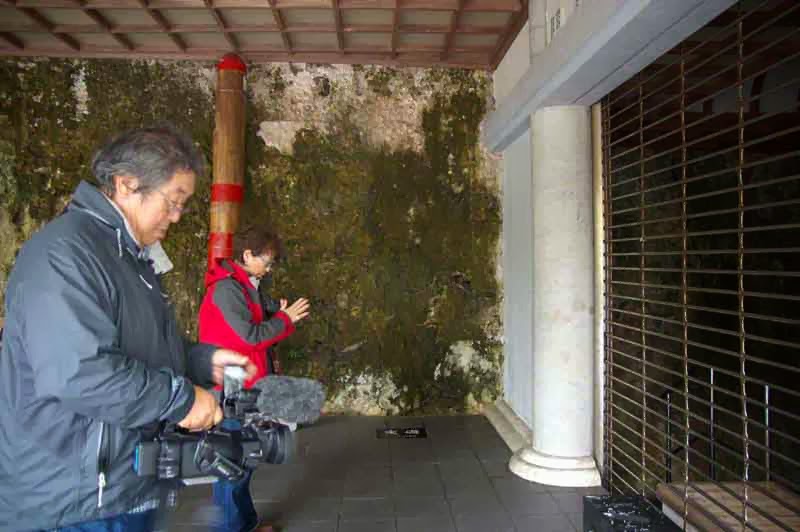 Offerings are tossed into the cave at Hakugindo Shrine for a good reason.

It assures future success for fisherman and all the uminchu.

So, I tossed some coins in there and prayed for them, too. 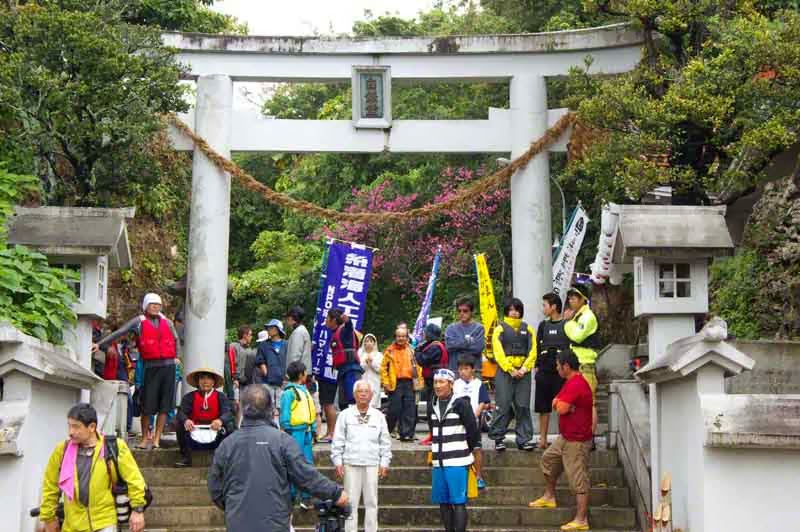 The Commisioner of the Itoman Sailing Club had everyone gather for a group photo. 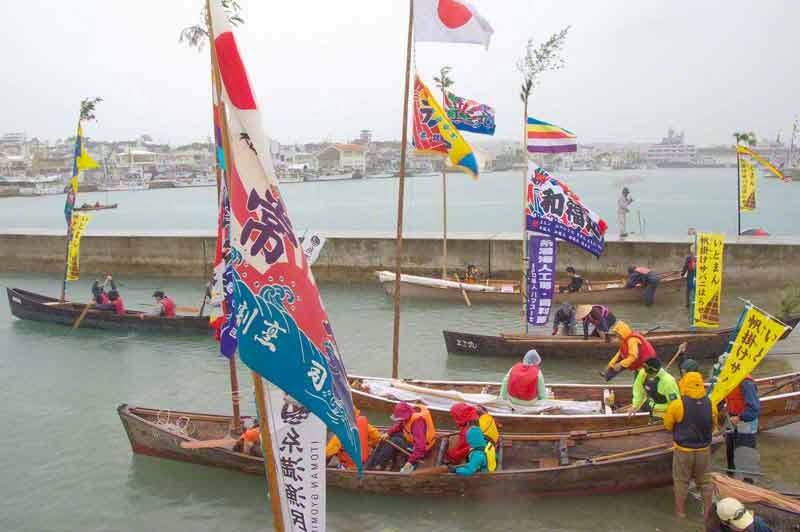 It started to rain, again as the boats were preparing to return to the starting point.

So, I turned-in my life jacket because, I'm really not that kind of sailor.

Posted by RyukyuMike at 1:34 AM