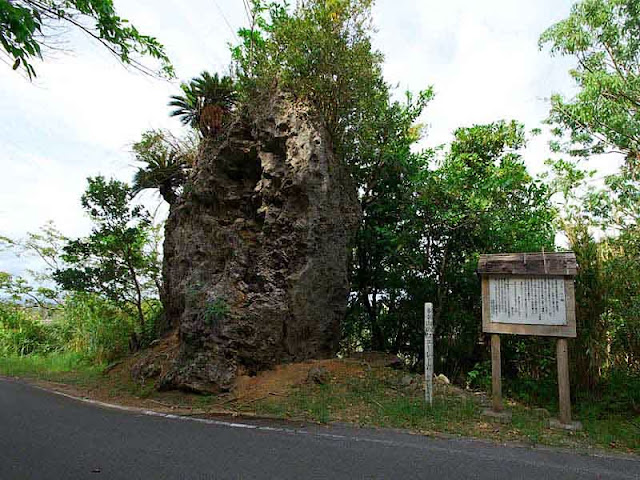 Mr. Miyagi, from the Onna-son Museum, gave me a Onna History & Culture brochure.

The nice thing is, the manual has both English and Japanese writing in it.

That's how we located this historical site.

And, we would never have heard about the highway robbers, if we hadn't read the book.

Everybody Loves a Dumb Criminal Story

Way back in the days of the Ryukyu Kingdom the mountainous road was well traveled.

This rock, standing tall alongside the highway was the scene of repeated crimes.

Fee-ree, according to my Okinawan Dictionary, means, holdup or, stick-up.

And, these bandits used it to their advantage.

People, going along this highway would have their belongings snatched.

The highway robbers would be perched on top of the rocks.

They took long poles with hooks at the end and grabbed traveler's valuables.

How Slick Was That ?

It got me thinking. They hadn't even invented the helicopter, yet.

Once they snatched someone's saddlebags, where the hell did they think they were gonna go ?

As the story goes, some gal from Itoman, chased them away with her wits.

And, another version says, a karate dude ran the crooks off using his sickle.

We Better Go Back and Climb That Rock

All bandits aren't as stupid as:  The 10 dumbest criminals in the world.

What if these guys had an escape route somewhere inside that rock ?

Mr. Miyagi, please, don't give away any more of those books, until I check it out !


Directions for those wishing to visit this historical site

Posted by RyukyuMike at 5:14 AM