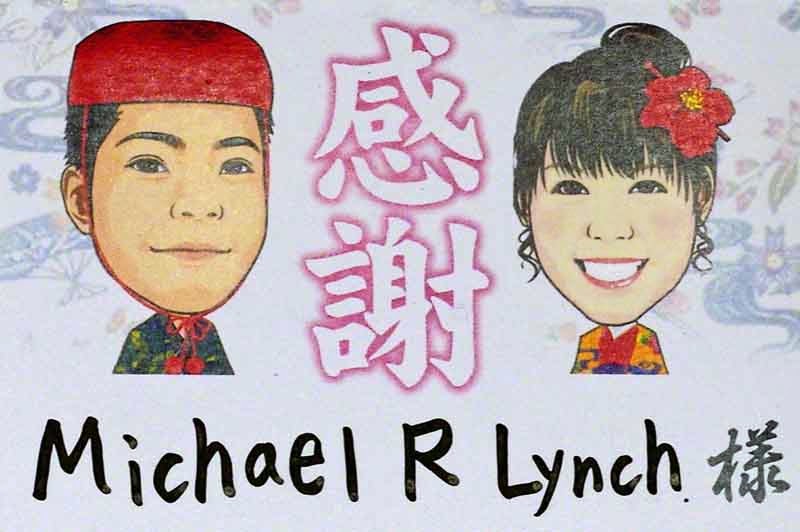 The only thing, I stole was this place-card, because my name was on it.

A brand new pair of yellow flip-flops were waiting for me in the car.

A well known fact: After a few hours in shoes, my feet would be killing me.

Okinawan Weddings Are a Blast

The event was held in Precious Hall at Zanpamisaki Royal Hotel.

And, from the minute we walked in to Precious Hall, we were treated like royalty.

A young gal, pulled out my chair and helped me get seated.

Maybe, she thought I was some visiting dignitary or, a senior citizen.

Someone else will have to tell you if all guests, get seated that way.

As soon as I got comfortable, it was time to look around the banquet room.

It's always nice to know, which direction the food and drinks come from.

The Bride and Groom

Takatoshi is the guy who invited me to the wedding.  We call him Toshi, for short.

Who ever the artist was, on that card, did a heck of a good job.

The bride's name is Rui.  She's prettier in person.

The tables are round and each one has eight chairs.

It would be nice to know how many folks attended.

The room, filled up, before I could figure out how many tables were in there.

Anyway, after three beers, who's counting ?

Fortunately, the cameras, stayed at home. No photos, were taken by me at this event.

In case, you've never seen an Okinawan wedding, I'll give some links, later.

While all the ceremonies, skits and dances were taking place, we were eating and drinking.

The round tables, are equipped with Lazy Susans.

And, every kind of food imaginable, from rice pasta to Filet Mignon, was served.

There wasn't anyone going away hungry, after this party.

And, they had my favorite drink, Orion Beer.

Only one act, that took place on the stage, caught me by surprise.

There was an Eisa group dancing and beating drums.

The groom, Toshi, was up there, leading them.

Were they trying to wear him out before the honeymoon ?

By popular demand, here it is.  No drum rolls, please. 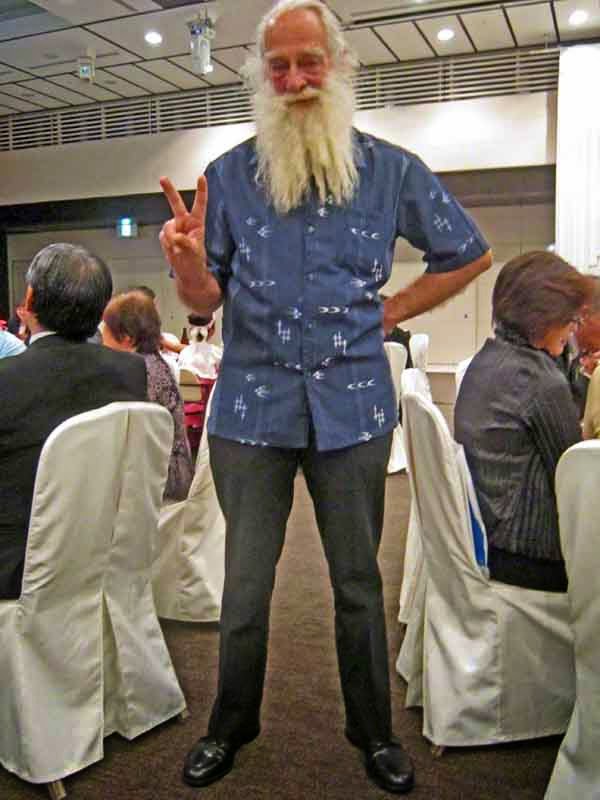 Note: Black leather shoes on both of my aching feet.

The peace symbol: It's just what people do in Japan, whenever a camera is pointed their way.

Hopefully, if I ever get invited to another wedding, the theme will be Beach Party !

Posted by RyukyuMike at 1:13 AM