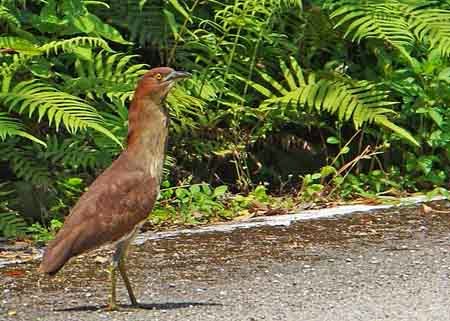 This red-colored bird was spotted on a road in the north of Okinawa.

But, after looking at several sites, a decision was made  to get some help with the ID.

Hat's off, to the experts at the Bird Forum.

They helped convince me, we've got a Gorsachius goisagi, here.

While, checking several websites with photos for identification, another discovery was made.

The bird is on the IUCN Red List, as an Endangered Species.

One of these days, I need to make a photo gallery of those, I have collected.

From my observations, there is a common denominator, at work here.

The biggest threat to wildlife, around the globe, seems to be humans.

The percentage who care about nature, is overwhelmed by those who don't give a hoot.

Management, zoology, conservation and whatever else, just ain't working.

Why don't the people who don't care about this planet, just leave.

Hop on a space shuttle and go screw up some other planet.

The wild animals and, a bunch of other folks, would be a lot better off.