Staying High and Dry Waiting for Storms to Blow By 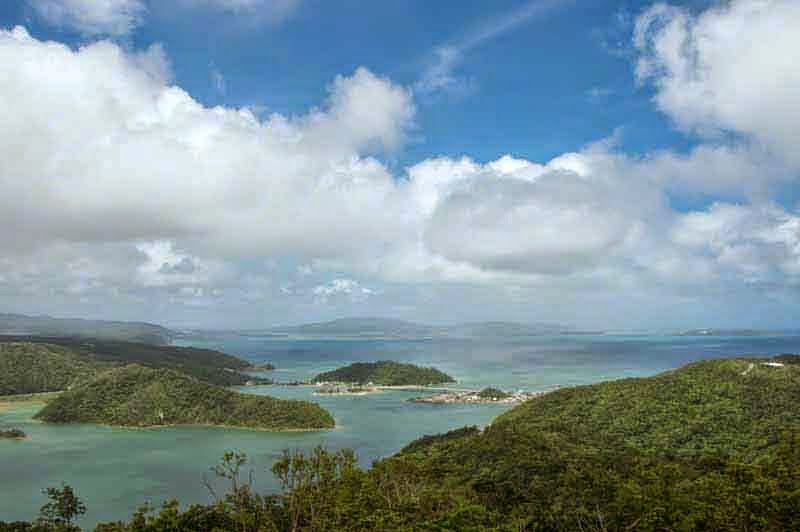 View from Hills of Ogimi

There are a few little tropical storms brewing out over the ocean.

Nothing to panic about but, there will be plenty of rainfall the rest of this week.

We headed north this morning, to get out and soak up a bit of sunshine and fresh air.

It sprinkled rain, on and off, a few times but, there was sunshine, too.

When the temperatures and humidity hit the 90's, I don't mind getting rained on a bit.
At higher elevations, the breeze felt good, as long as there was some shade available.

Looking down at Shioya Bay, I decided to take advantage of the blue skies in this scene.

The Shioya bridge is in the lower third of the frame.

Out in the center, a little rain squall is passing through, dropping 100% humidity to earth.

This is a scene, I'd like to re-create, on a nice clear day.

For Those Concerned About the Storms

There's really no reason, to panic. It looks like Okinawa won't have a big typhoon.

If you like Fahrenheit and miles per hour:  AccuWeather

For anyone using the metric system:  Japan Meterological Agency

Living in a tropical paradise, storms can be expected, sometimes.

It's a good idea to plan for the worst and hope for the best.

So, my plan consists of, going to get some candles, flashlight batteries and beer !

Posted by RyukyuMike at 4:11 AM