Check These Varmints Out

When you spot one of these Mongoose critters, it is usually by itself.

And, they normally disappear quickly. 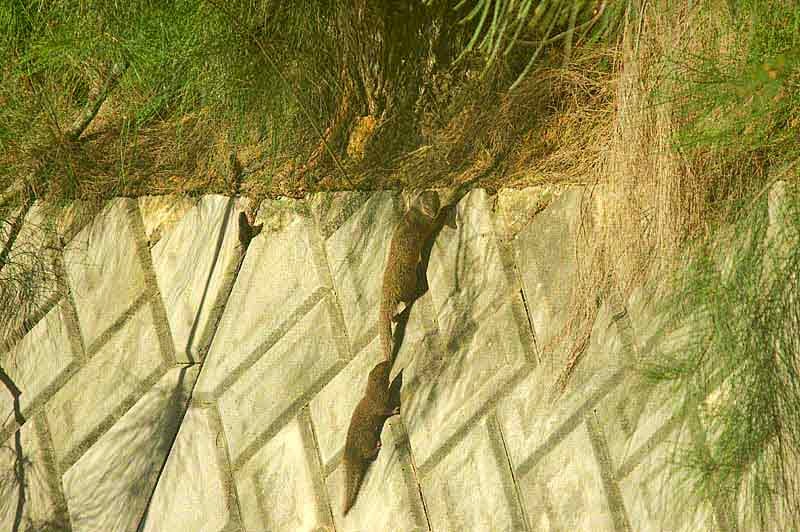 These two were captured digitally, along the bank of the Okukubi river.

Just guessing, I'd say, it was probably a mother and son.

A split second earlier, I saw the number two mongoose, slip and fall into the river.

That's when, I decided, it might be a good idea, to shoot them.

The first mongoose turned around and, made sure the little one got to the top of the wall.

A father wouldn't have bothered to wait, because that's just the way dudes are.

When you're running for your life, it's supposed to be...

Research on the Mongoose in Okinawa

There are plenty of photos and links on these critters in my files, already.

And, I blogged about encounters with this invasive species, in the past.

It's always a good idea, to see if anything has been written about them recently.

That's how I came across a few items, I had never known about the mongoose.

The professor who introduced these weasel-looking things to Okinawa:

He came up with the original brainstorm of bringing the mongoose to the Ryukyu Islands.

That was because he saw a mongoose and snake fight, in a cage.

And, the mongoose won.

The plan was to use the animals for getting rid of the poisonous habu snakes.

Being natural enemies, the mongoose would kill all the snakes.

Biological pesticide is what they called it.

The mongoose, in nature, is a daylight sort of critter.

The habu is active at night.

The original population of 17 mongooses, expanded to something like 30,000.

And, they go around eating things like the endangered Yanbaru Kuina.

Time for a Quote

From an excellent article concerning the mongoose problem we have this:

"Ten years after the release of the mongoose in Okinawa, one agricultural officer, Kyukichi Kishida, published a cautionary essay in an academic journal, saying that mongoose might not be a perfect solution for Okinawa, citing the case of mongoose being introduced in the West Indies to hunt rats but also eating poultry. Later, he rescinded his article with the deepest apology, says Ogura. "This can explain the dominating of the environment of academic circles back then, he adds."

Now, I've heard of government coverups and some corporate ones, as well.

Academics, can do that kinda stuff, too?

Mongoose in a Birdcage

A good old grandpa, in Ginowan caught a mongoose and kept it in a cage.

The darn things were eating his chickens' eggs.
His grandson likes the furry animals so, gramps kept it alive for the kid.

What a nice guy.

But, one night, he got a surprise.

A habu snake came into his house and decided to swallow the mongoose.

Grandpa came along and made the snake, puke the mongoose loose.

This was brought to you by the Ryukyu Shimpo.

The used to have these demonstrations at tourist attractions.

A few years ago, they were banned.

The snakes' rights movement or, animal activists had the entertainment put to an end.

From a friend, Tom Corrao, a video of what takes place these days:


To Pluralize the Word Mongoose

Mongooses, sounds correct, to me.

But, I went and did a search, just to be sure and, got this surprise.

Here's what I think:  We should eradicate all the mongeese in the Okinawa Islands.

Mongoose: Never Knew She was Pregnant When I Shot Her

Photo Fun in the Mountains of Okinawa, Japan

Posted by RyukyuMike at 2:09 AM