Beyond the Torii: King Sho En (尚圓王) Once Lived Here 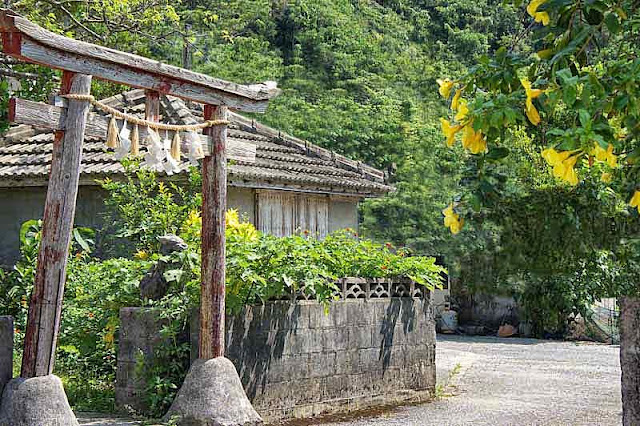 Born on an island off the northeast coast of Okinawa, Kanamaru farmed the land.

Hard working and successful, his ambitions may have led to his downfall.

One year, during a dry spell, his fields were the only ones where the crops had water.

Envious neighbors, accused him of stealing the water if, you can believe that.

Stealing, a precious thing like water, was considered a capital crime it that neck of the woods.

So, Kanamaru, hopped on a boat and, escaped to the big island of Okinawa.

Back behind the torii gate above, was the first place he resided.

It's in Ginama, a peaceful little fishing village, scrunched between the ocean and mountains.

There isn't much room for farmland so, maybe he decided to move along.

He might have suspected the captain of the boat he sailed on, would snitch and collect a bounty.

Or, it's possible, he tried his hand at fishing and, decided that wasn't the life for him.

What possess people to move from the country, to the big city, always baffles me.

He moved to Shurii and got some sort of job with the government.

Pretty soon folks figured out how efficient he was and, the king hired him as treasurer.

Somehow, a the Sho Dude heading the dynasty started, disappointing the rest of the royalty.

They asked Kanamaru, how he would like to become the king.

He changed his name to Sho En and made all of his family some kind of royalty.

And, he kicked all the other Sho people out of the castle so, they couldn't be royalty anymore !

Dang. Don't you just love a good story with a happy ending ?

The Forgotten Dynasty of the Ryukyu Islands

Posted by RyukyuMike at 3:05 AM