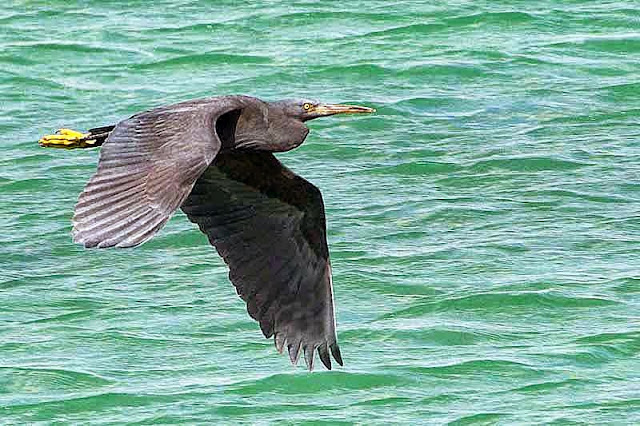 Out in the blazing midday sun, I wasn't too satisfied with light for shooting this bird.

Out on a seawall, I was looking back towards the shore, when I first spotted the critter.

The tripod was set up and, I took enough photos to put together a GIF.

The afternoon light was harsh and, I knew a black bird wouldn't make a great image.

But, some folks like to see how these birds walk and stalk.

It did wind up catching one small fish, which it quickly swallowed.

Ten minutes later, the bird flew over the blue sea, straight towards me.

Of course, it heard the shutter snapping on my camera, in rapid fire and, turned.

The image above, I'll save and the other 199 photos can go in the trash.

The photos were taken using a Pentax K3 and 300mm lens with a 1.4 converter.

That gave me a focal length of 420mm.

When, I pulled that up on Google Earth, I zoomed in on the map.

And, it looks like those satellites knew the exact spot, I was standing on at that seawall.

Technology these days is really amazing.

Wouldn't it be nice if, people didn't use it, to evil things ?

Article in BootsnAll
Posted by RyukyuMike at 2:33 AM